Traditional Japanese clothing did not have pockets. Men used pieces of carved wood or ivory called netsuke to hang small personal items from the sashes around their waists.

The earliest netsuke (‘root-fix’ in Japanese) were probably simple knobbly roots. Then craftsmen began to make intricate carvings from wood, ivory and other materials. 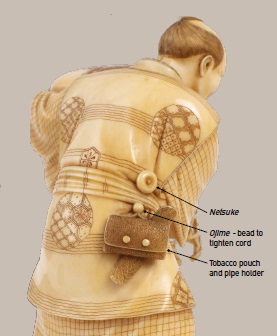 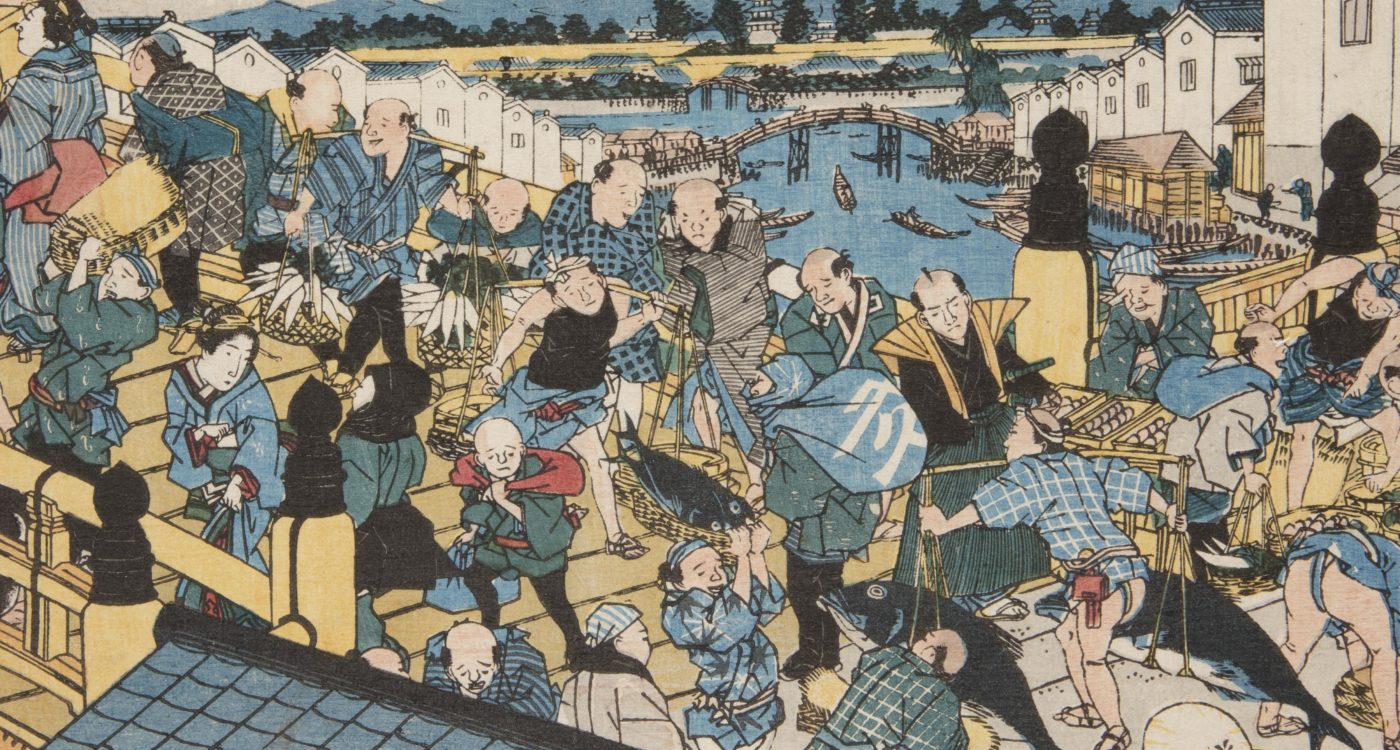 During the Edo period (1603-1868) the military government passed strict laws governing what people wore. A wealthy merchant could show his taste in a subtle way by wearing a tiny, beautifully carved netsuke and not get into trouble.

In the Meiji period (1868-1912), the Emperor encouraged men to wear western clothing and netsuke were less in demand. Craftsmen used their skills to make decorative carvings called okimono, often larger and more delicate than netsuke, for sale to the growing numbers of western tourists.

A fine netsuke could take one or two months to make.

The craftsmen would use different tools such as saws, chisels, knives, and drills to shape the carvings, then sand and polish them. Sometimes makers carved their names on their work.

Craftsmen often inlayed one material into another. Many netsuke were stained with ink to highlight finely carved details. 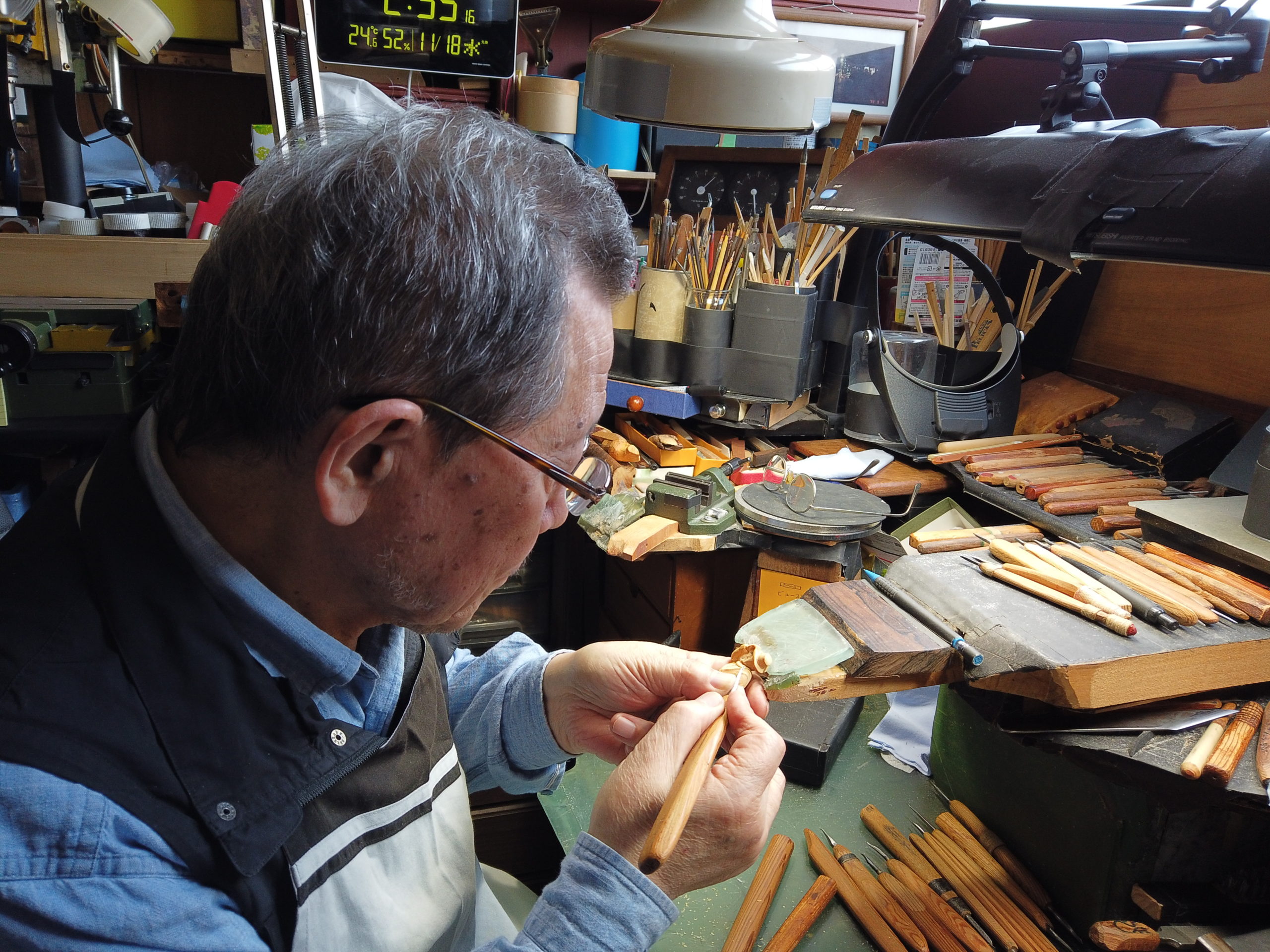 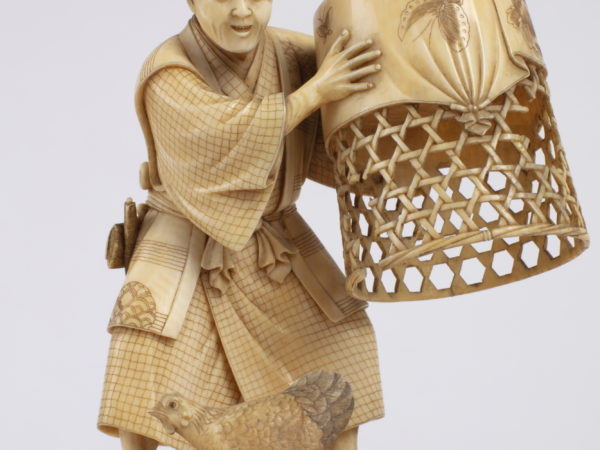 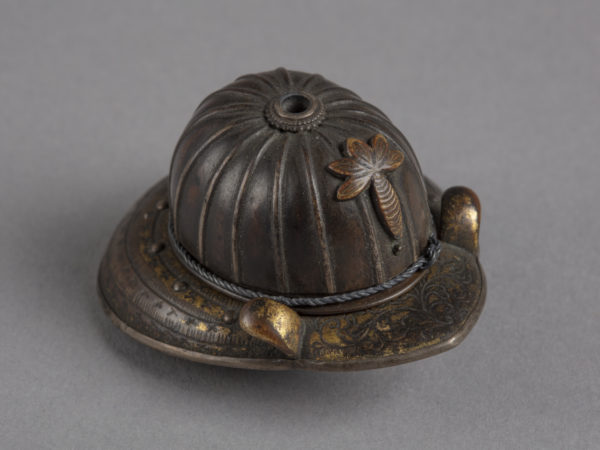 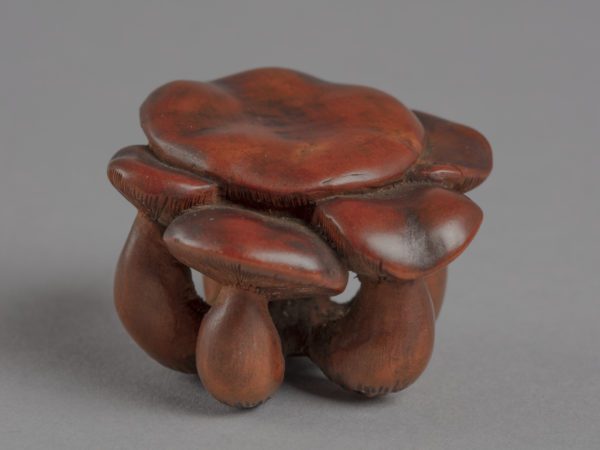 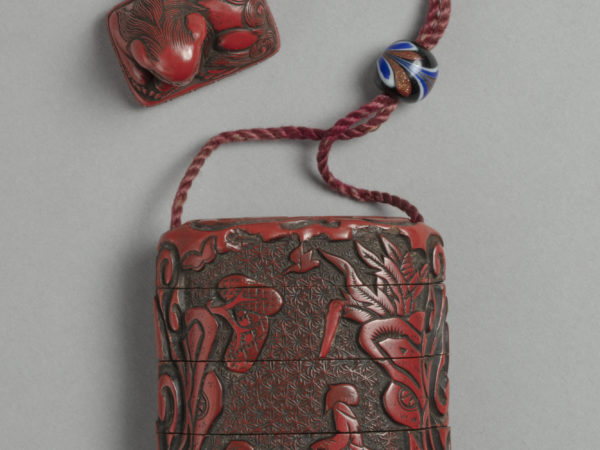 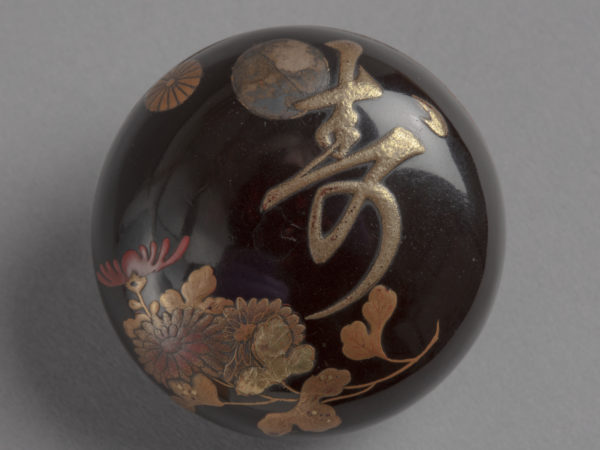 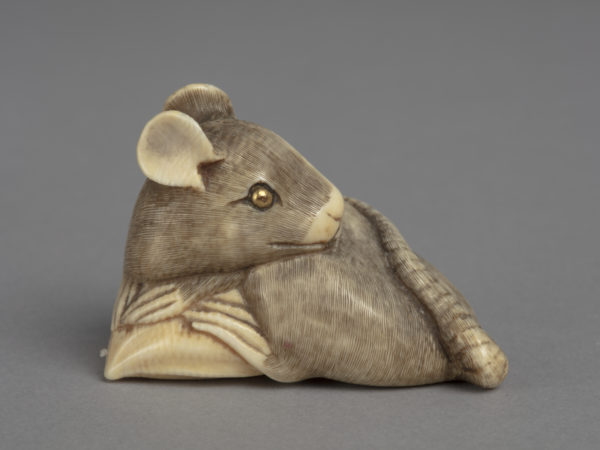 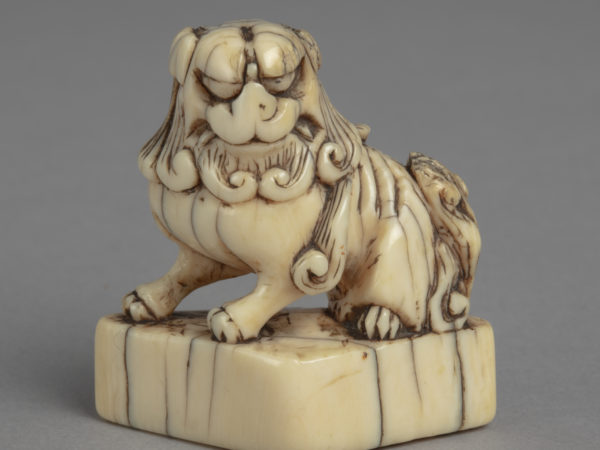 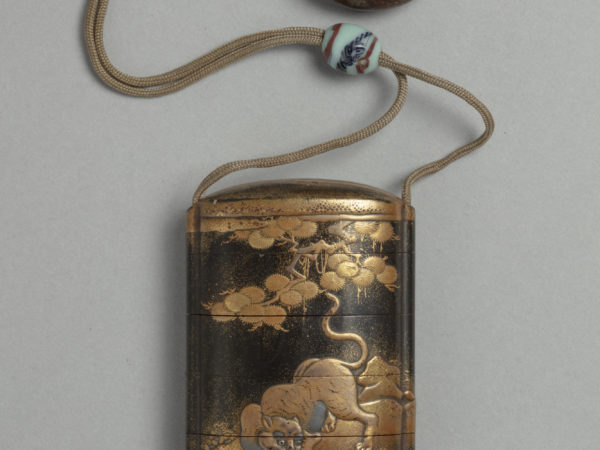 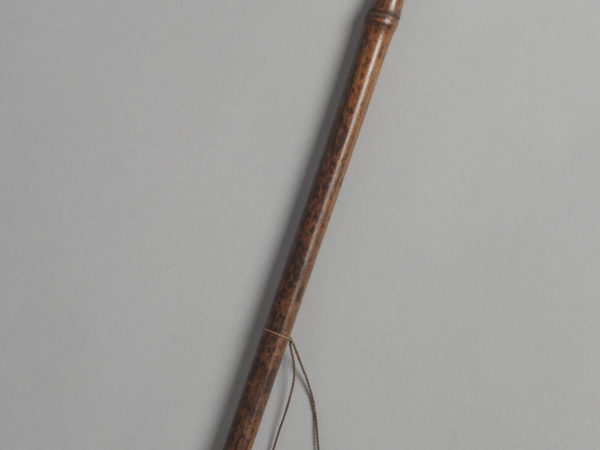 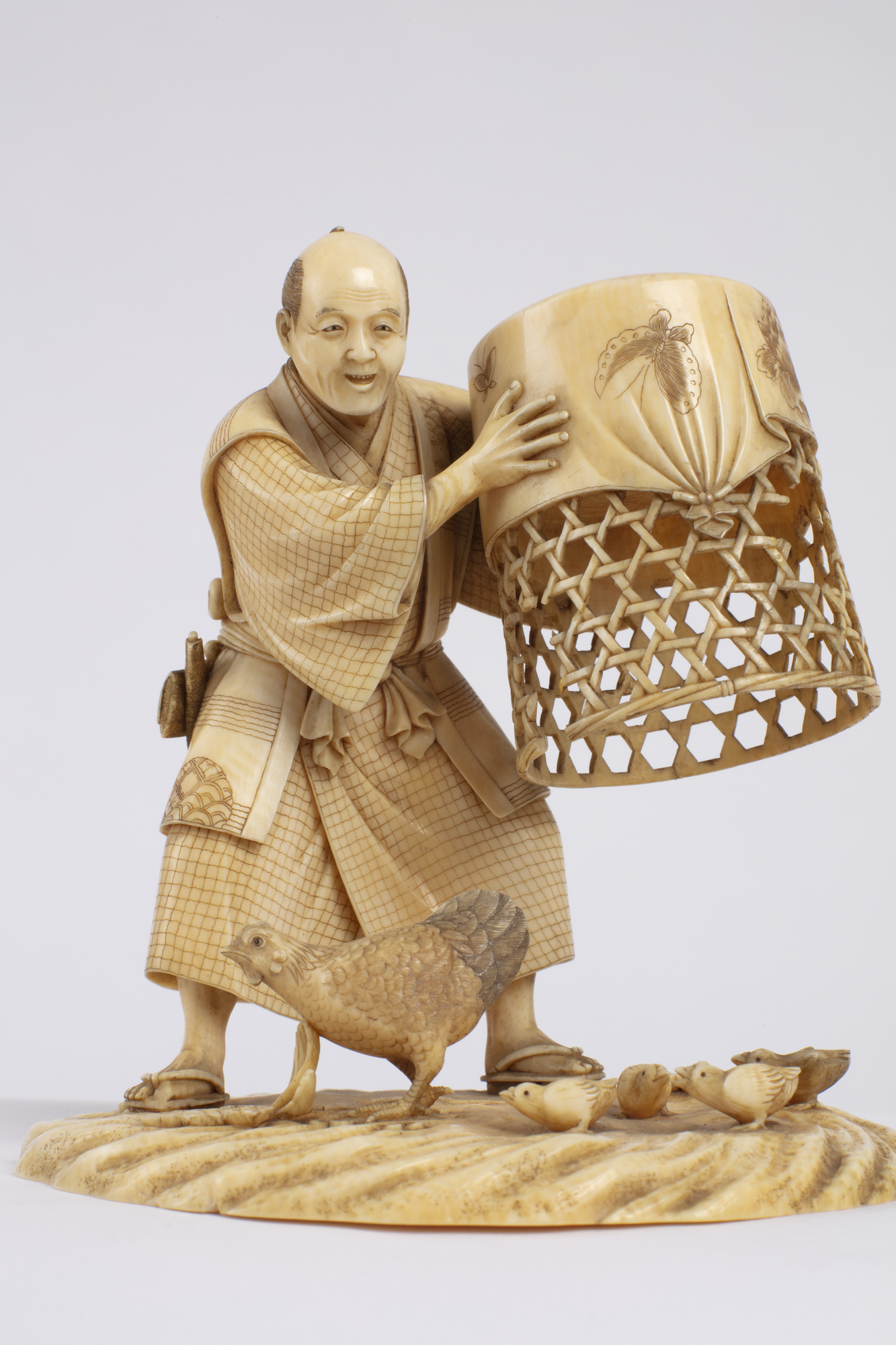 Tucked into this man’s sash you can see a round netsuke from which hangs a tobacco pouch and pipe case. This is a good example of how men wore netsuke in daily life.

Japanese craftsmen made large carvings like this as decorative items or okimono, particularly for the western market. 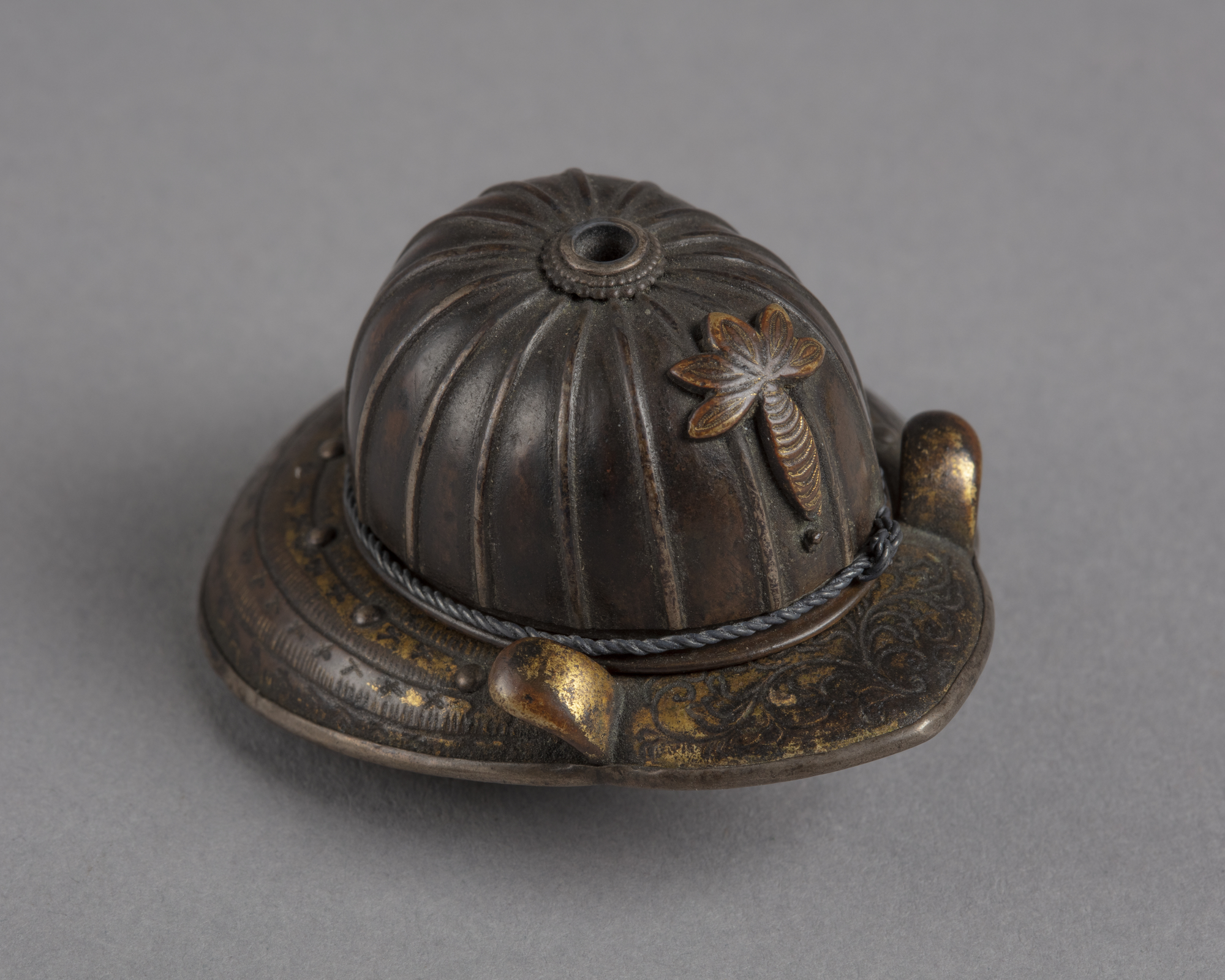 Kabuto were metal battle helmets worn by the samurai classes and their retainers.

This metal netsuke opens up and possibly functioned as an ashtray, an incense burner, or as storage for tinder to light a tobacco pipe. 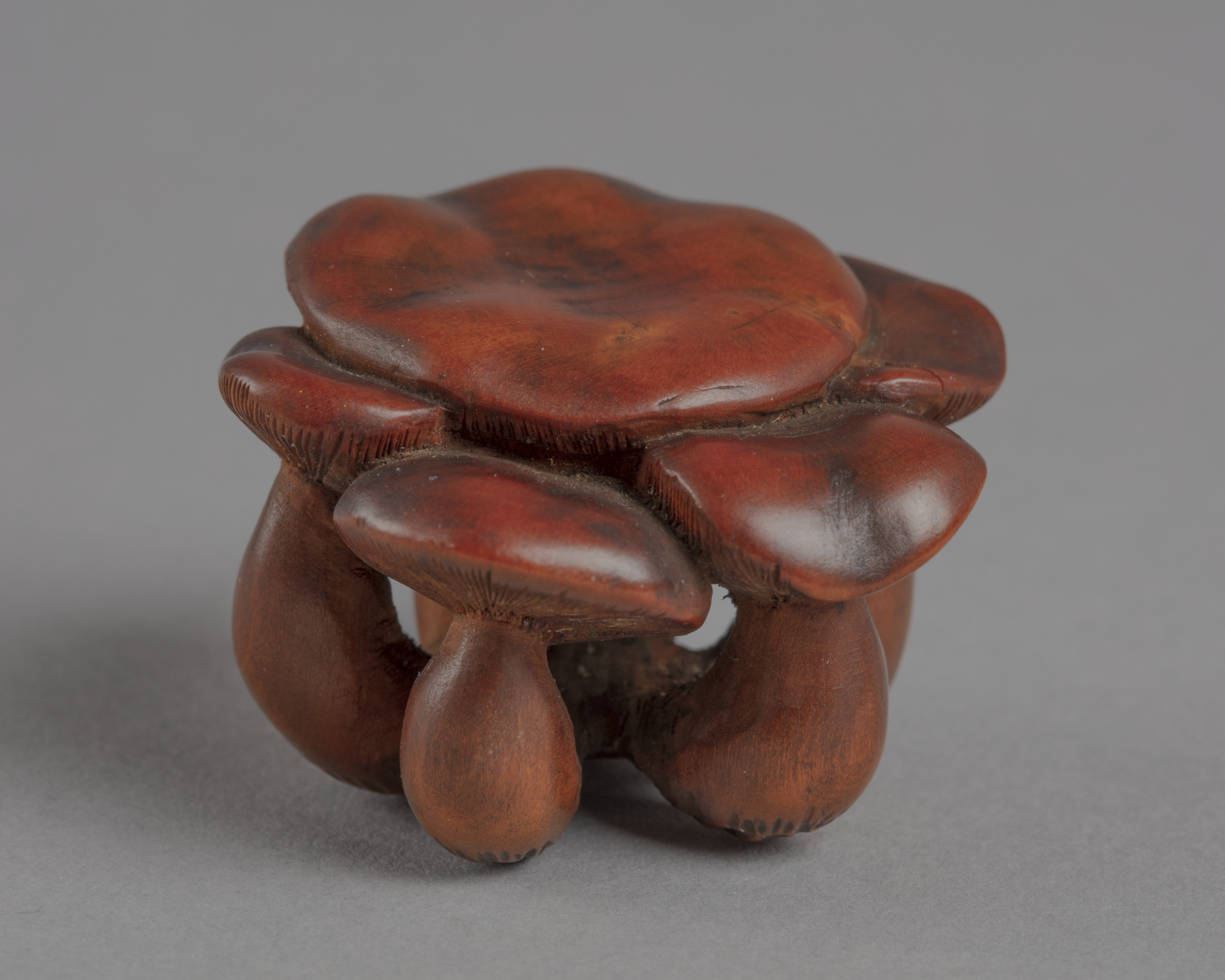 The mushroom was a popular subject for netsuke carvers as it allowed the artist to display his technical skill through the different textures.

Mushrooms form a major part of the Japanese diet, and approximately 4,000 species grow in Japan. 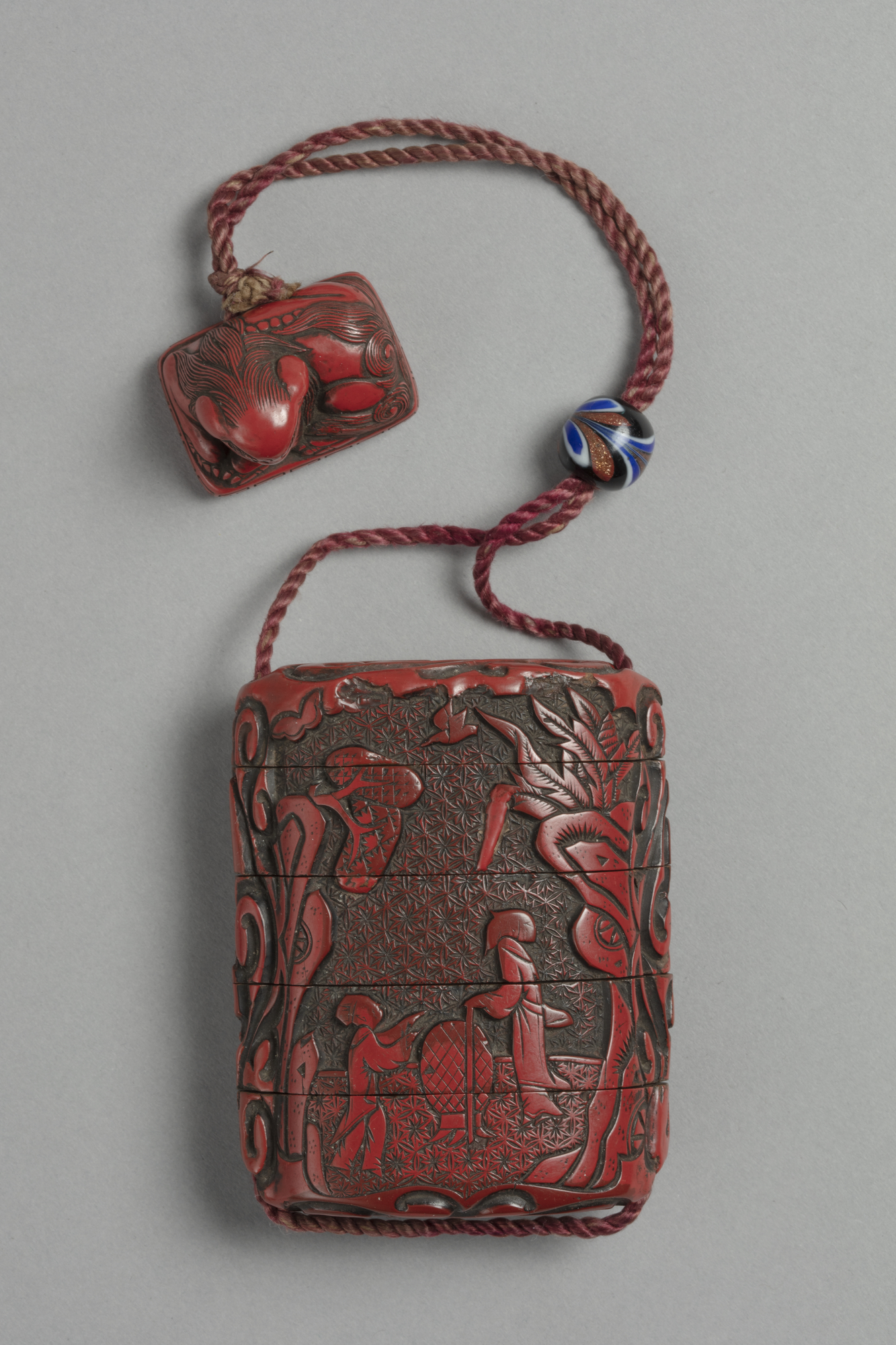 To open the compartments of an inro, you loosen the bead on the cord and ease them apart. For this type of lacquer ware, a worker painted up to 300 layers of lacquer (sap from a tree, Rhus verniciflua) onto the wooden base of this box. Each layer was left to dry for a day, then after many days, a carver created the design. 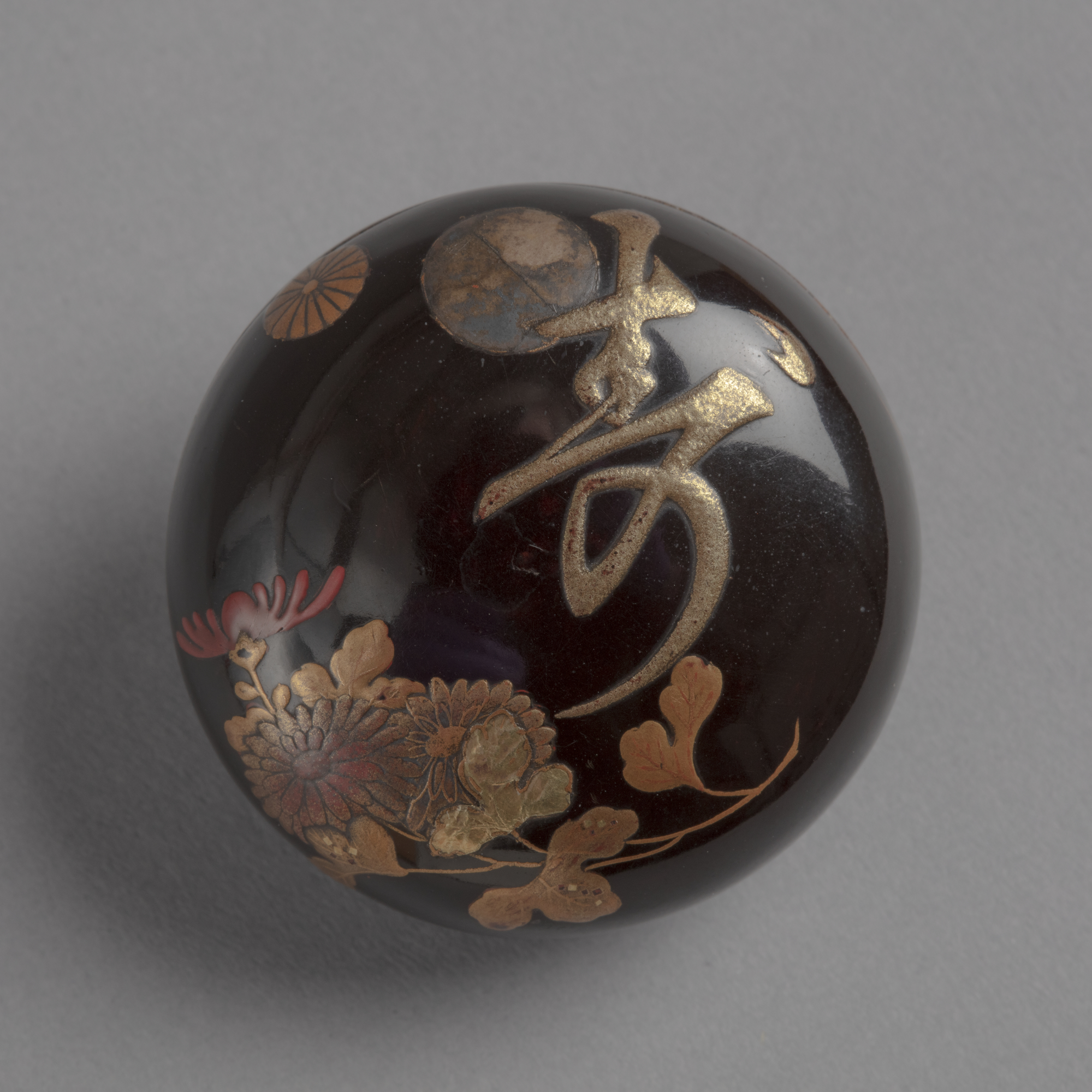 This lacquer netsuke with chrysanthemums, symbols of long life, opens up to reveal a red lacquered inside sprinkled with gold powder (maki-e).

The character written in gold reads kotobuki or ju, and means ‘congratulations’, ‘best wishes’, or ‘long life’. Perhaps someone gave this netsuke as a gift. 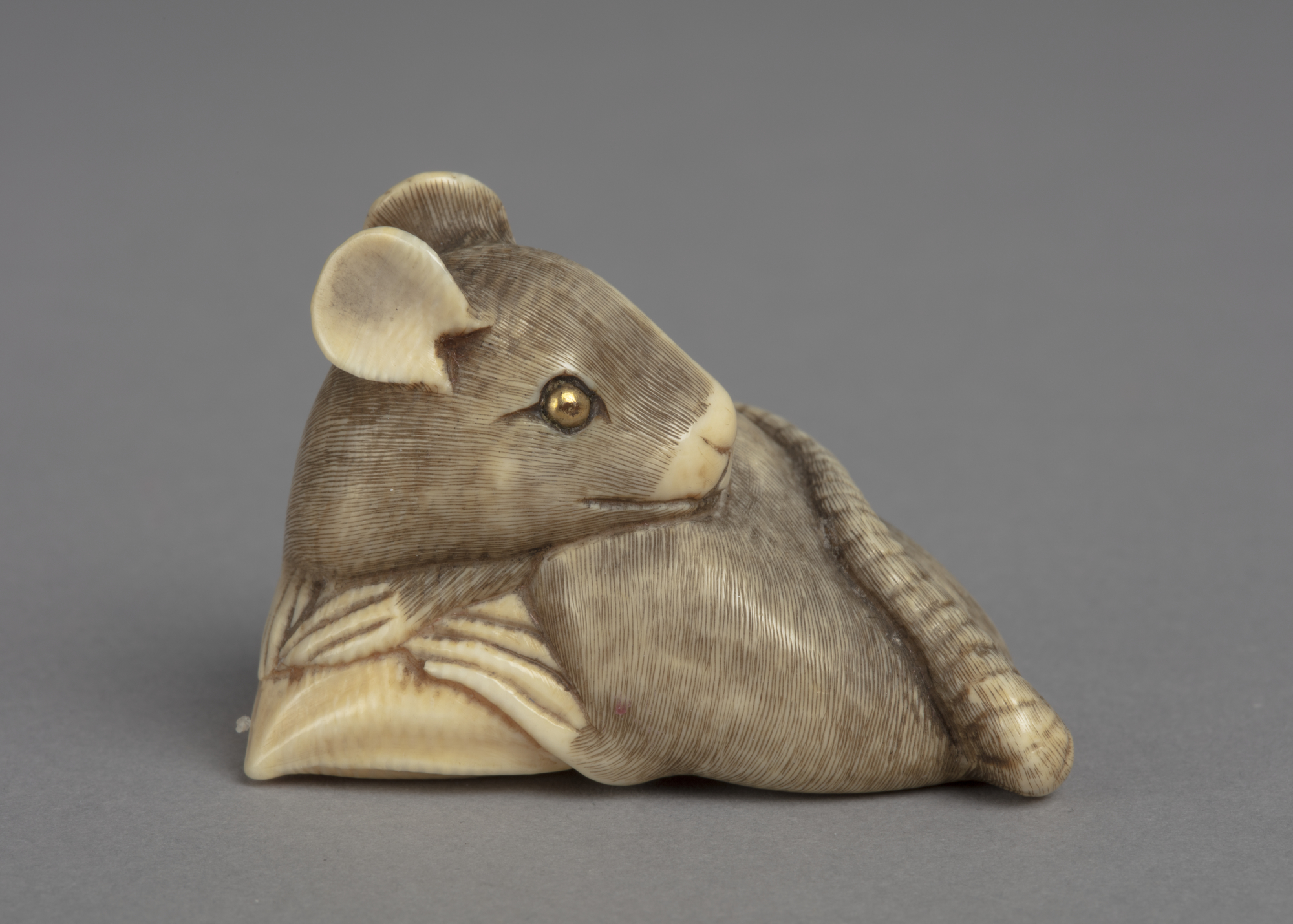 Netsuke carvings of rats were popular. People believed that rats were a sign of a good harvest and that they accompanied Daikoku, the god of wealth.

Can you see what this rat is holding? For a rat it would be a delicious snack. What is your favourite snack? 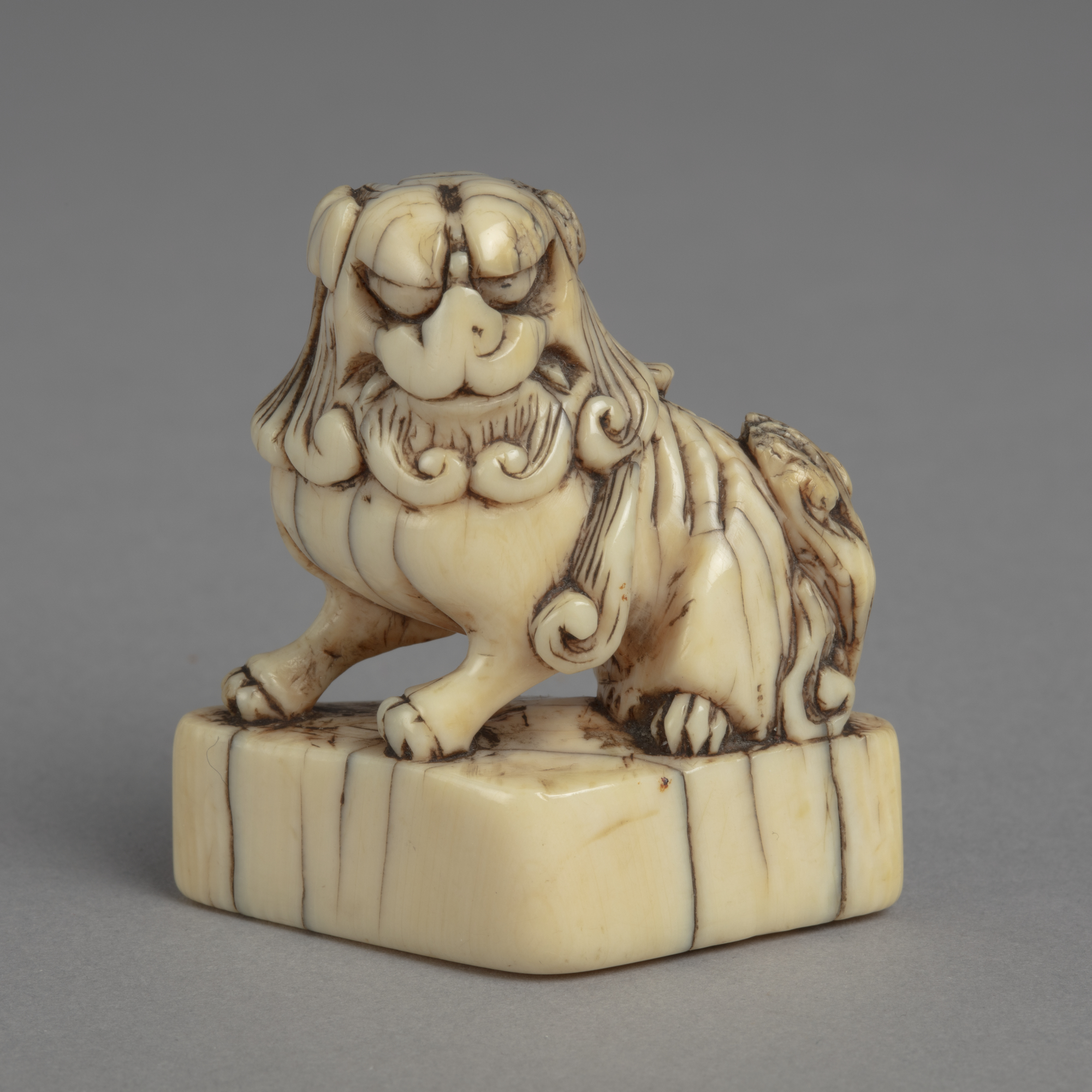 Just as your dog might keep guard by the front door, statues of Buddhist lions can be seen across Japan in pairs outside temple and shrine entrances.

What animal would you choose to keep you safe? 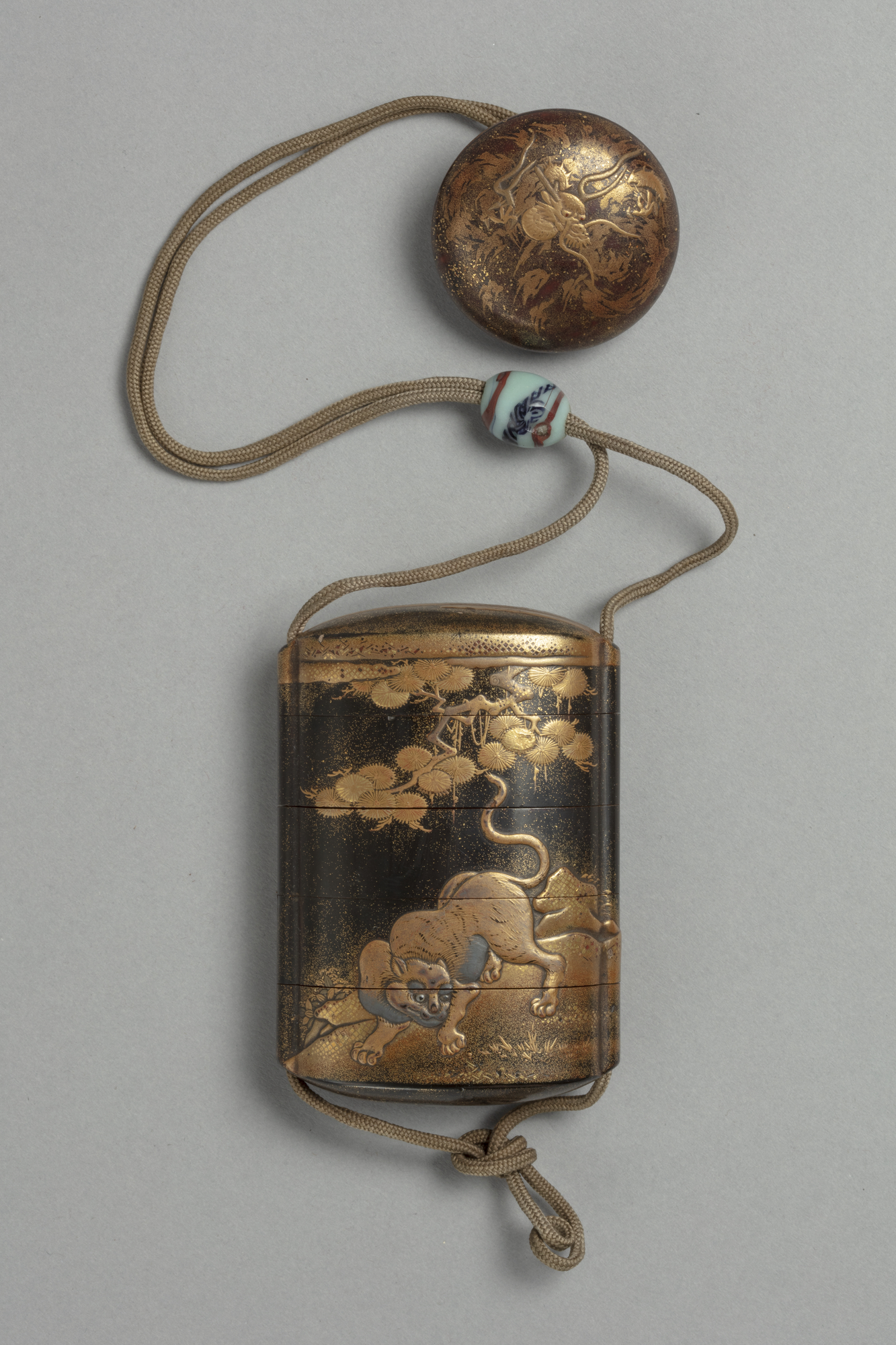 Men used boxes called inro with several compartments to carry small things such as their signature stamps and medicine. They hung the inro from their belts using netsuke.

If a man had a beautiful inro it showed he had money and good taste. This inro has a design of a tiger and the netsuke has a dragon. Together, these animals were believed to be the most powerful creatures of the land and sky.

To open the compartments of an inro, you loosen the bead on the cord and ease them apart.

For this type of lacquer ware, a worker painted up to 300 layers of lacquer (sap from a tree, Rhus verniciflua) onto the wooden base of this box. Each layer was left to dry for a day, then after many days, a carver created the design.

Many Japanese men smoked tobacco, using long pipes like this one.

They hung pipes and tobacco pouches from their kimono sashes when not in use. A netsuke toggle held the equipment in place. Some women smoked too.