Bristol's temporary war hospitals treated an estimated 118,000 men from across the Empire.

Men and women who came back from the front had to find ways to cope with their memories, often unable to speak about their shattering experiences with their families.

Over 6,000 Bristol men died in the First World War. Their grieving families kept the memories of their loved ones alive. Precious letters and keepsakes were saved, and photographs displayed.

Memorials to Bristol’s war dead provided a focus for public mourning. Their names were put on plaques in parks, schools, offices, churches and factories around the city.

About 900 men and women who fought in the First World War are buried in Bristol’s cemeteries. They are not just Bristolians, but people from across the Empire.

The dog is waiting patiently for his master to return, but the condolence scroll on the wall tells us, the viewers, that Sapper Alexander Murray of the Royal Engineers will never come back. We don’t know whether Morley knew Alexander Murray. He did understand the emotion: his two nephews were both killed in the war. 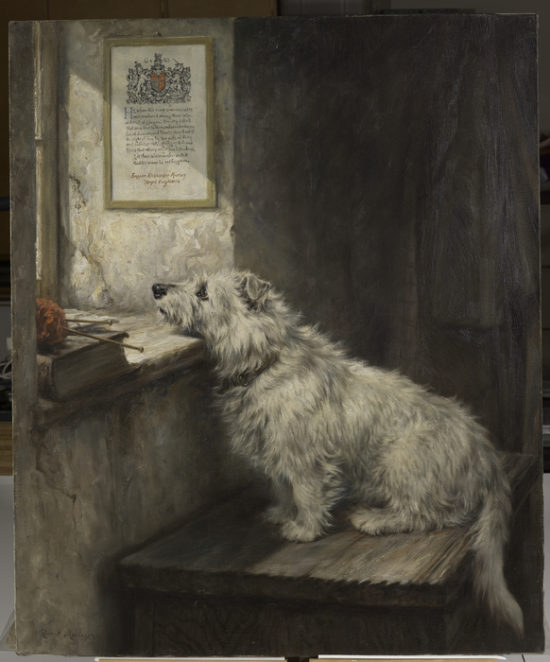 “Some borne on stretchers dreamed of home”

Badly wounded men who survived long enough were shipped back to Britain for treatment. In Bristol alone there were 14 war hospitals.

Over 70,000 wounded soldiers came through Bristol Temple Meads station during the war. When a train arrived, rows of stretchers covered the platforms. Volunteers from the Red Cross, the St John’s Ambulance Brigade and the Women’s Voluntary Aid Detachment met the wounded with cups of tea and moved them on to hospitals in a fleet of ambulances and private cars.

The war hospitals aimed to get men fit enough to be sent back to fight. Others were disabled for life, whether physically or mentally.

When the Bristol Lunatic Asylum in Fishponds became Beaufort War Hospital, 45 Asylum patients stayed on to help run the hospital.

The hospital had just 30 beds for psychiatric cases, for men with shell shock (or Post-Traumatic Stress Disorder as it would be called now). 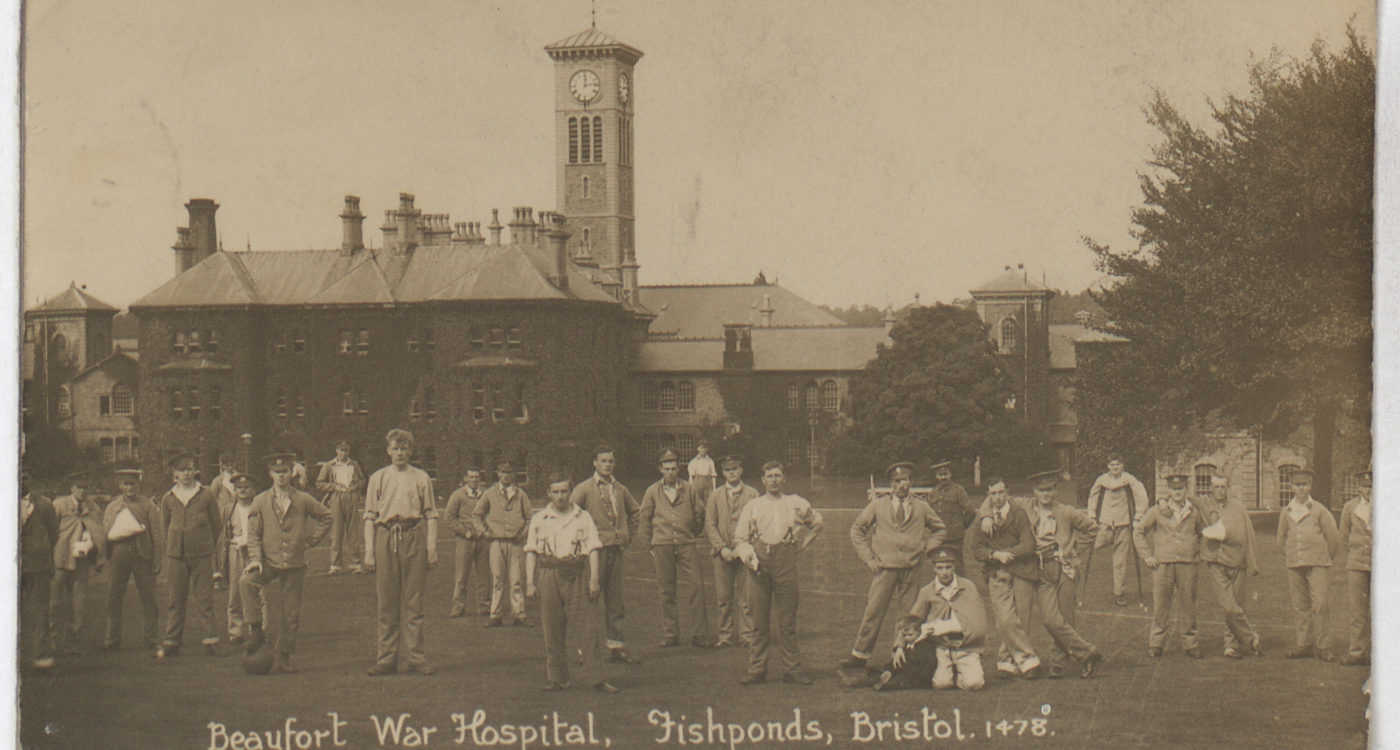 “Nobody ever used the phrase ‘shell shock’. Somebody was wounded – but never ‘shell shocked'”

Shell shock was not well understood in 1914. Men traumatised by the shelling, by seeing a friend blown to pieces, by killing a man at close quarters, were seen as weak and lacking moral fibre.

The lack of understanding meant that some men were court-martialled for cowardice, when they were actually suffering from what we would now call Post-Traumatic Stress Disorder.

Brothers Alfred and Arthur Jefferies joined the 6th Battalion, the Somerset Light Infantry. Alfred fought at Ypres and was wounded, then returned to the battle of Loos in 1915. He was hospitalised with shell shock, and discharged. Both brothers fought in the Somme offensive of 1916: Alfred was reported missing in August, Arthur was killed in action in September.

Alfred was charged with desertion. Shell shock was no defence for him: two officers spoke up for his good character, but higher officers deemed him a coward. He was shot at dawn on 1 November 1916.

Some officers with shell shock got treated by psychiatrists at Craiglockhart Hospital in Scotland. Margaret Watson-Williams went there to bring her son Guthrie Watson-Williams home. She wrote to her daughter that he needed

‘quiet, food and nothing to fret or worry him… no sudden noise, etc’.

He was later discharged as unfit for further Army service.

Wording on the official memorial plaque, 1918

“He died for freedom and honour” 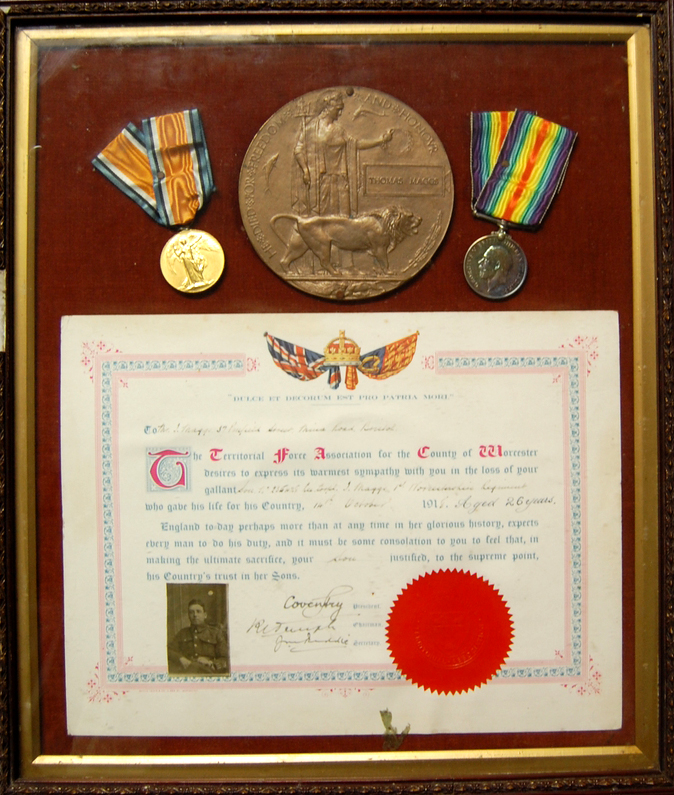 Even before the war was over, the British government had decided to commemorate the war dead with a memorial plaque. This would go to the family of the dead, as thanks and commemoration for the loss of life.

The design was by competition. The winning design by Edward Carter Preston showed Britannia and the British lion with dolphins to represent British sea power. Production began in December 1918. The next-of-kin were sent a form, which had to be counter-signed by a vicar or magistrate, to prove they were the rightful recipients of the plaque.

Men and women who were killed in battle, or died of illness or wounds received during their military service, were commemorated by a plaque, individually named. The families of men shot after Courts Martial did not receive a plaque.

The British government produced and distributed over one million memorial plaques.

Lance Corporal Thomas Maggs from St Werburghs joined the 1st Battalion, the Worcestershire Regiment. He died in France on 14 October 1918, aged 26, and is buried there in the Douai British Cemetery. His parents created a personal memorial with his photograph, medals, death plaque and a scroll from the Regiment.

Letter from Lieutenant Stanley Booker , 7th Battalion, the Worcestershire Regiment, about his Corporal, killed by a German shell, France, July 1916

“He is buried in a cemetery which holds more than 1100 English dead besides French, Hindus and Germans”

Men killed in fighting were buried where they fell, or taken back behind the front line for burial. The numbers of bodies often meant mass burials in a long trench, and the burial service could be cut short by enemy shelling.

Soldiers would go out into No Man’s Land at night to bury bodies in shell holes or shallow graves, or carry the bodies back for burial elsewhere. British and German troops might be out dealing with their dead and ignoring each other.

The soldier’s bayonet and helmet marked a grave in No Man’s Land. It could be blown up by shelling. A grave behind the front had a wooden cross, with the soldier’s identity disc nailed to it, or his name painted on it. 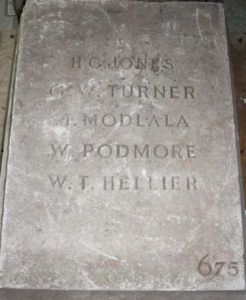 After the war, many temporary graves were dug up and the bodies transferred to a military cemetery. Bodies are still being found buried on the battlefields today.

The Red Cross War Memorial at Arnos Vale Cemetery, known as Soldiers’ Corner, memorialises 282 war casualties who died in the war hospitals in Bristol. Most are buried in Arnos Vale. Five men were buried in Grave 675. They included Hamilton Jones and Mrogoyi Madhlala* from South Africa. The two could not fight together, because one was white and the other black, but they were buried together.

*This is the spelling from the Commonwealth War Graves Commission schedule, which differs from the spelling on the plaque. Loaned Arnos Vale Cemetary Trust.

“The war that will end war”

In the aftermath of the First World War hardship continued, but people hoped for a better world.

Some men and women in Bristol prospered while others suffered.

Thousands of former servicemen returned home, though they did not all find the bright future they might have expected.

The city changed as new houses were built and industries grew. Some women found greater freedom while others faced the struggle of bringing up a family alone.

The Labour Party published these posters for the 1923 General Election. The heroism of the soldier fighting for his country underlines the poverty of the ex-serviceman and his family. This is followed by a Utopian vision of people moving forward together into a sun-lit future. 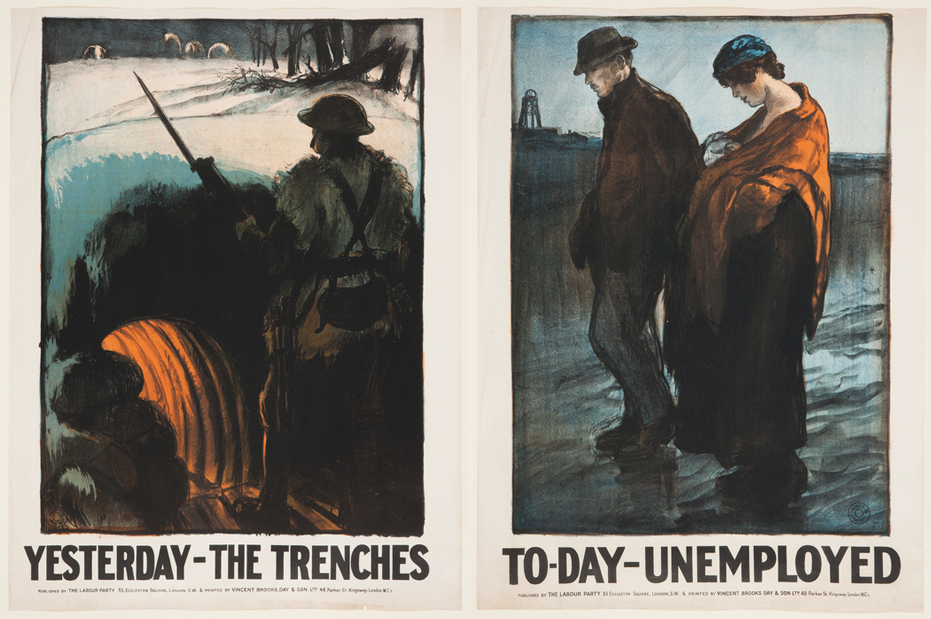 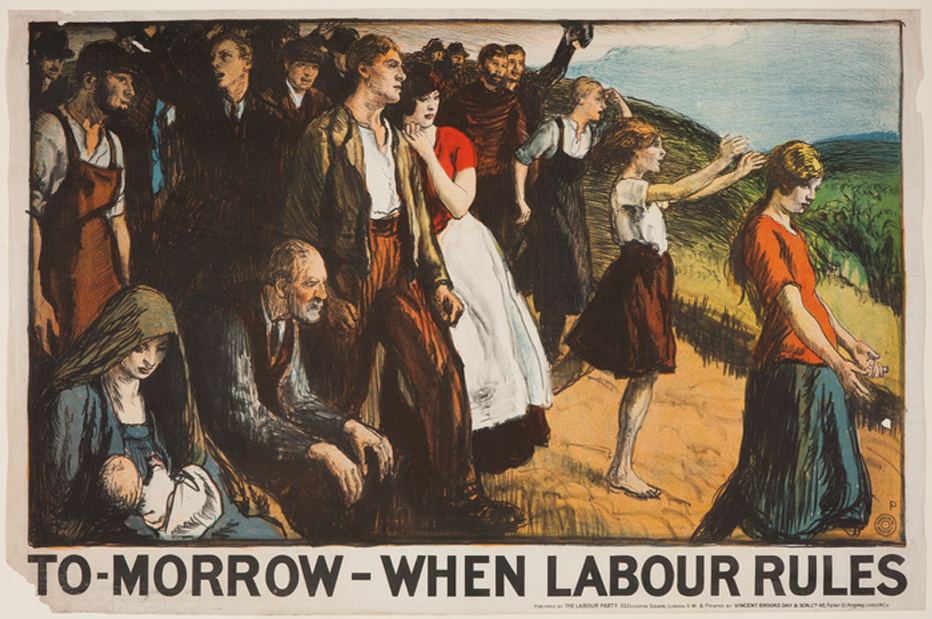 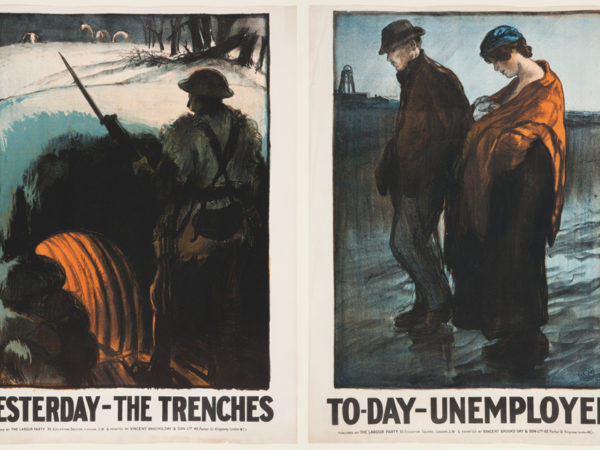 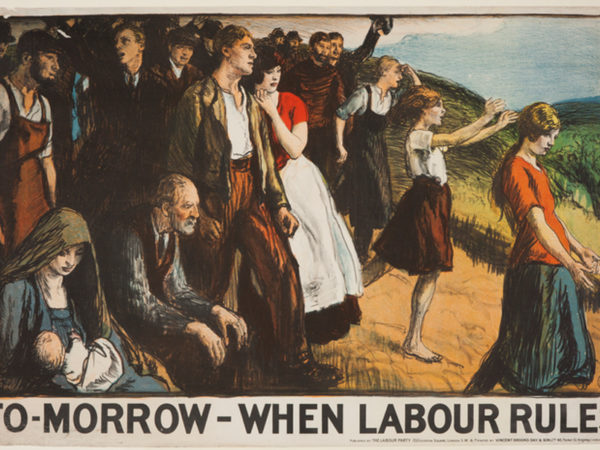 The First World War was supposed to be “the war to end all wars”.

Instead, there has been fighting somewhere in the world every year since 1918.

Millions of people have died or been displaced from their homes as a result.