The First World War changed the lives of people around the world and caused the deaths of millions.

This is Bristol’s story.

It’s not about global politics or the battles fought, but about people’s lives. Thousands of troops and wounded soldiers came and went. Men volunteered. Some refused to fight. Women took on new roles. People were displaced. Old industries thrived and new ones started. People were moved by conflict, and the city changed.

This online exhibition looks at themes from the larger 2014 exhibition Moved by Conflict – Bristol and the First World War: Lives Changed Forever. 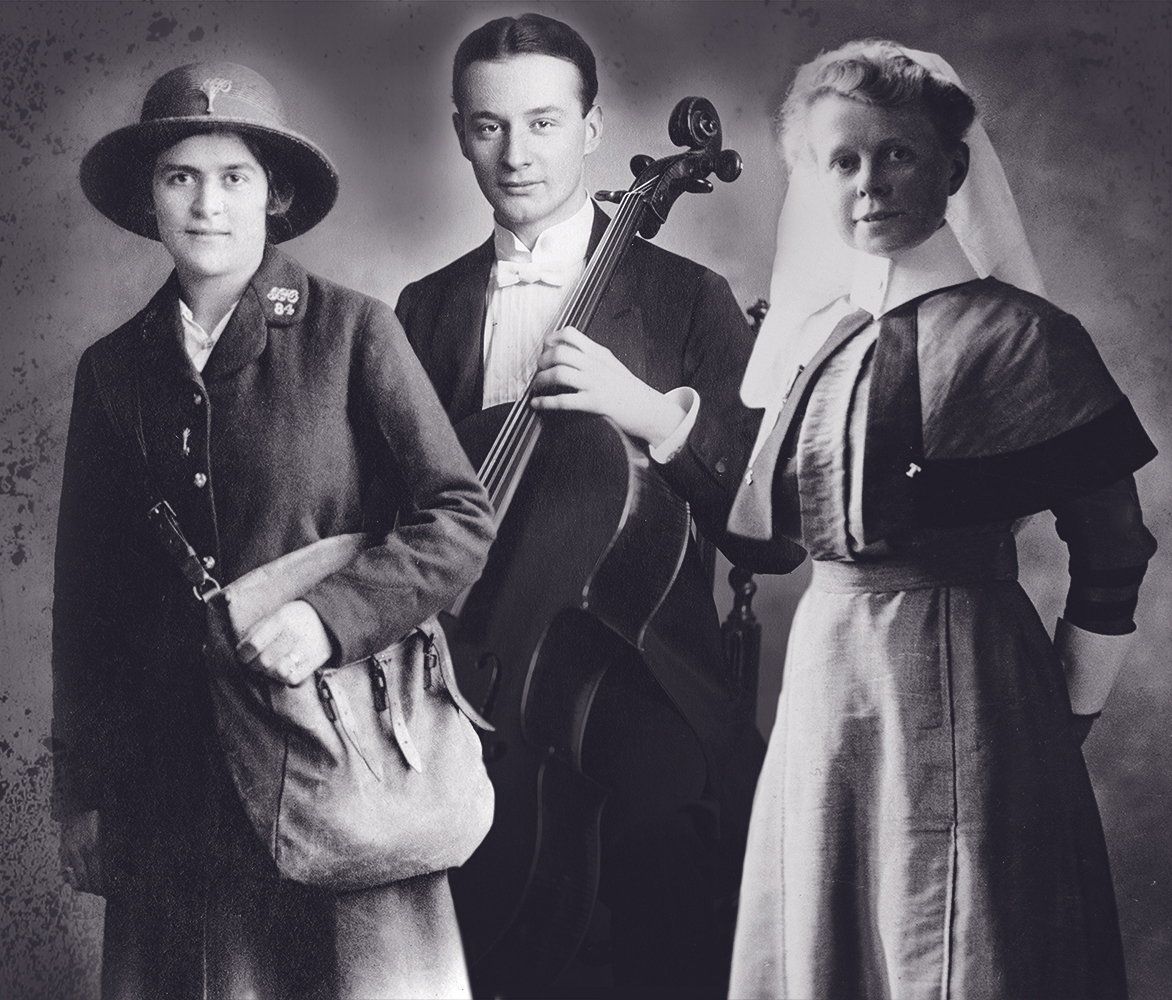 With thanks to exhibition sponsor Sanlam.

“It will all be over by Christmas so if you want to see anything, join up quickly.”

When war was declared men were pressured from every side to do their duty for ‘King and Country’. The streets of Bristol were transformed by brightly coloured posters, marching soldiers and the drums of military bands.

Over 55,000 Bristol men enlisted. Many volunteered in the first few months, expecting a short and glorious war; many more were later forced into military service by conscription. Those who could not fight were still encouraged to do their bit.

Men and women who dared to oppose the war on political, religious or moral grounds faced harsh treatment from the authorities and were shunned by their neighbours.

About 55,000 men from Bristol were engaged in the different theatres of war from Belgium to Egypt. Over 6,000 of them were killed.

Uprooted from their lives, men kept the vital link with home by writing to their families. 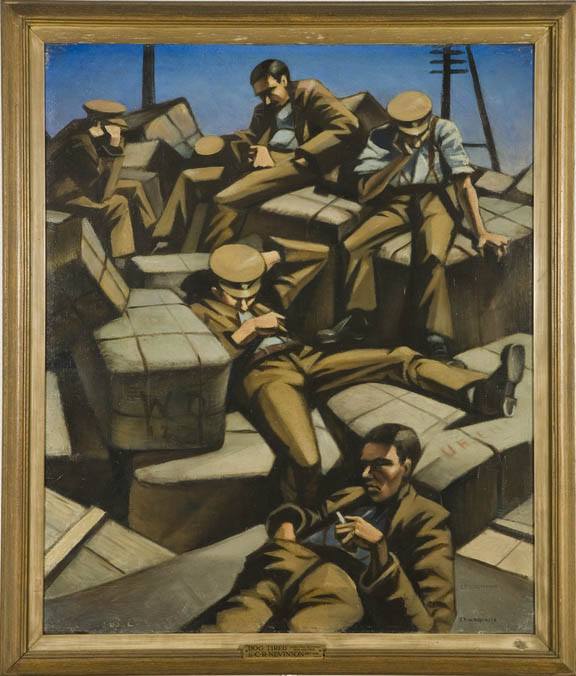 Enlisting for the war effort 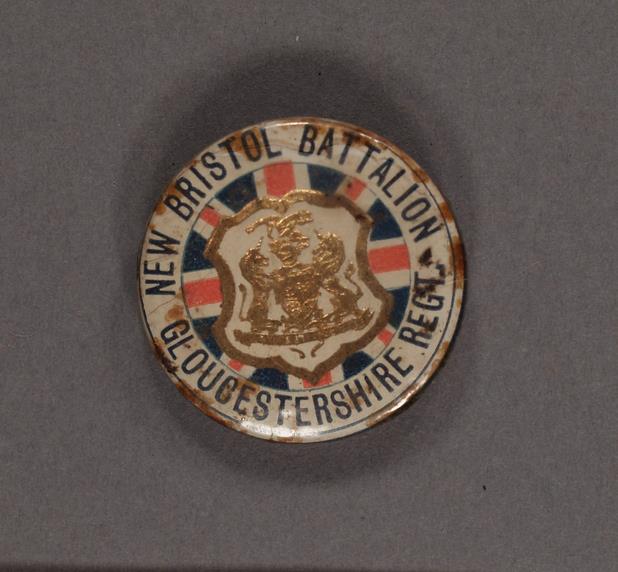 Many of the men who volunteered in the first months of the war formed the 12th Battalion of the Gloucestershire Regiment, known as Bristol’s Own. At first, the recruits continued to live at home and go to work, so they wore badges like this to show that they had volunteered.

Men who may never have left Bristol before found themselves fighting in unfamiliar places like France, Egypt, Turkey and Palestine. They risked their lives on land, at sea and in the air.

“When I heard that a city battalion was being raised in Bristol, I came home in mid-September and joined up”

When war was declared on 4th August 1914, Bristolians flocked to join the Army.

The Bristol Citizens’ Recruiting Committee took charge of recruitment, and decided to form a Citizens’ or Pals’ Battalion, the 12th Battalion the Gloucestershire Regiment, which was always known as ‘Bristol’s Own’.

Within two months, 990 Bristol men had joined the 12th. They lived and trained at the ‘White City’, the site of the Bristol International Exhibition which closed in August 1914. At first they trained in their own clothes, before supplies of uniform came through. They also had to train with dummy guns, until they were issued with Lee Enfield rifles. ‘Bristol’s Own’ sailed for France in November 1915. 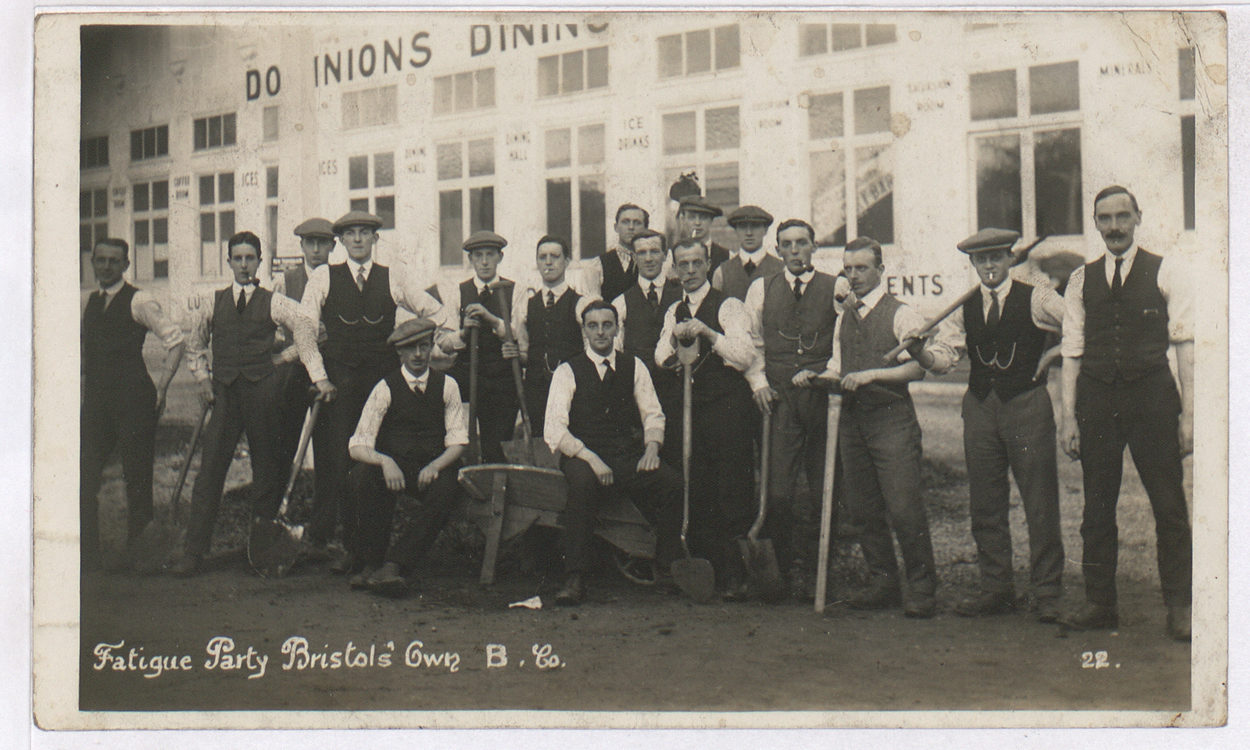 “Friday 30th April 1915. Went into trenches at Ploegstart. At night”

Albert Clark worked at the Wills tobacco factory. In November 1914, aged 25, he joined the local regiment and went from Henbury to training camps and then to the Western Front in France. His pay was 1/- (5p) a day.

He wrote his will in the back of his Soldier’s Pay Book. He left everything he had to his fiancée Elsie Pearce. He carried her photo with him in his pocket.

They married in July 1915, perhaps when Albert had finished his training and was about to go on active service. He went out to France but within weeks he was injured. In August 1915 he was brought back to Bristol on the hospital ship Dieppe.

A year after his wedding day, he was invalided out of the army. He died in 1950. 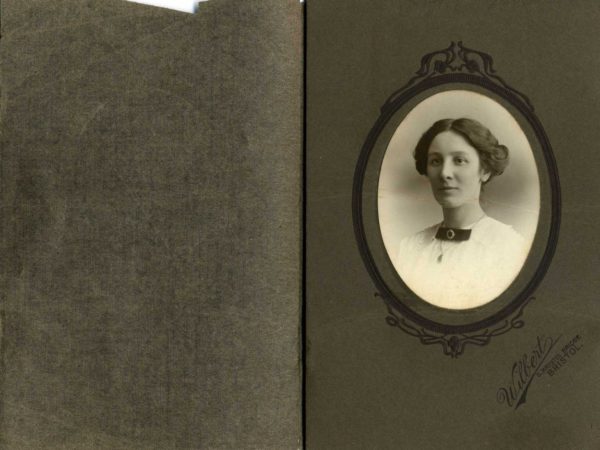 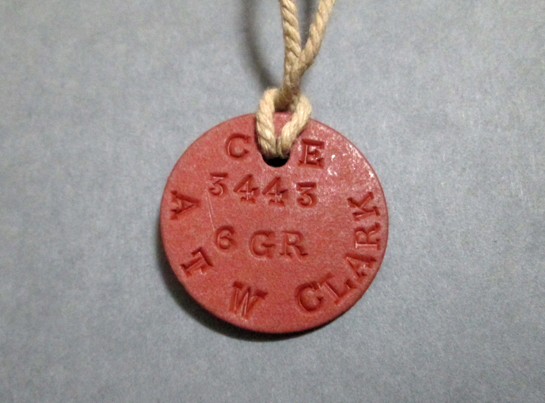 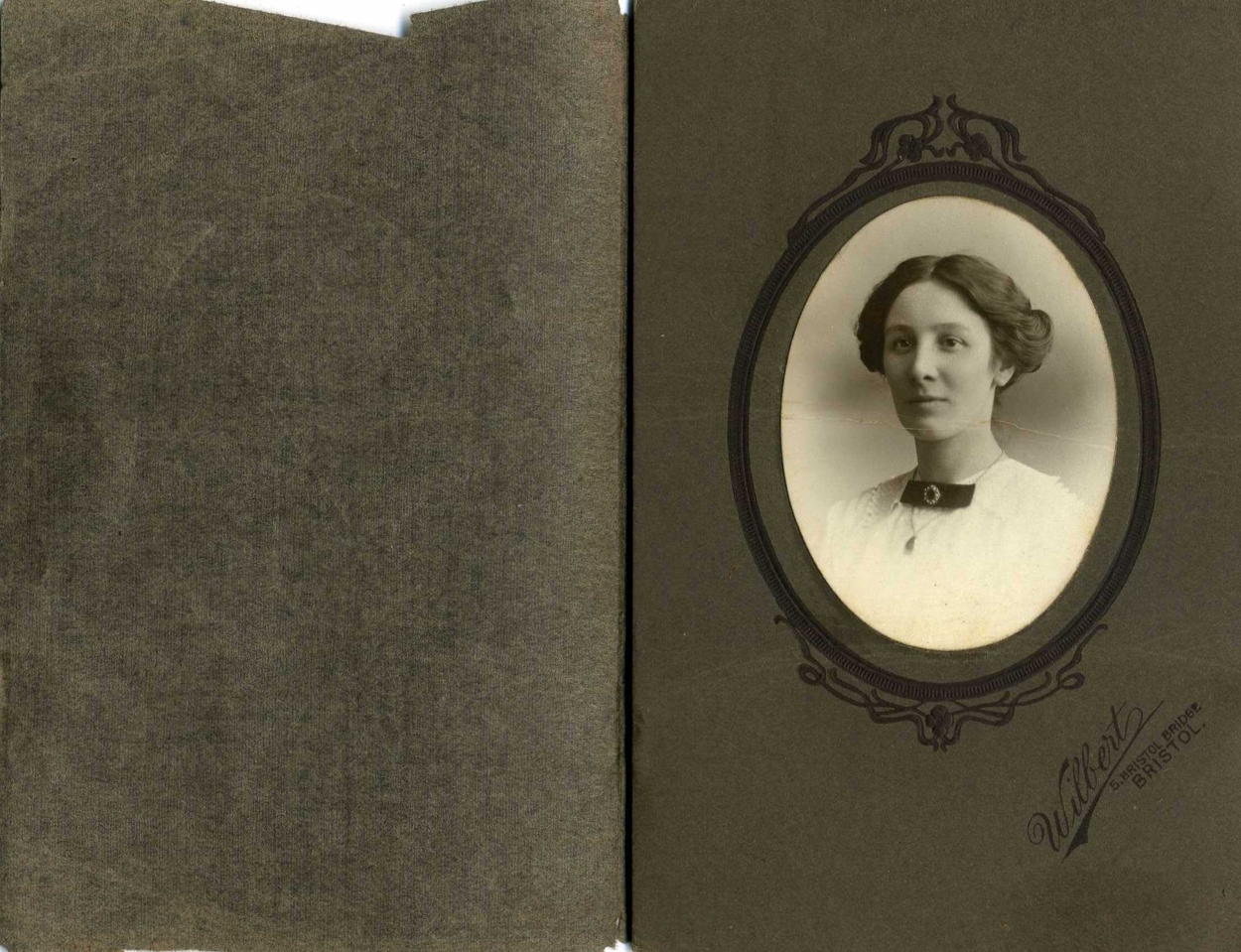 Photograph of Elsie Pearce. Bent in two places, probably from being carried.

“Sister, have you a cigarette?” 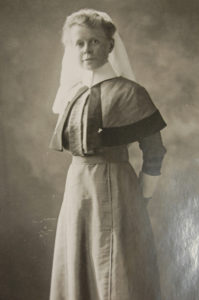 Trained nurses were needed both at the fronts and at home in the War Hospitals. Many women volunteered for nursing through the Voluntary Aid Detachments, with a short period of training before starting work. A few went overseas to the Field Hospitals, but usually this job was reserved for trained nurses.

Sister Alice Sampson ran the Riddle Ward at the General Hospital in Bristol. She joined the Territorial Forces Nursing Service before the First World War: like the Territorial Army, the TFNS nurses continued their normal job but prepared for war.

She was sent to No. 16 General Hospital in France, at Le Tréport, near Dieppe. Base Hospitals were often at the coast, somewhere with good rail links, to allow easy transport of the wounded from the Advanced Dressing Stations and the Casualty Clearing Stations at the front, and if needed, home to Britain.

Opposition to the war

Some men and women opposed the war for religious, political or moral reasons. Their opposition took many forms, including demonstrations, refusal to fight, and art and poetry. The government often met protests with harsh punishment.

The Whiteford brothers from St George each reacted differently to the call to enlist, but their father was proud of all of them.

Wilfred, the youngest, volunteered to join the Dorset regiment and went to fight abroad. The eldest brother, Graham, refused to fight but instead served in the Army’s Non Combatant Corps. Hubert was an ‘absolutist’ – he refused to fight or to work in any way towards the war effort. Like his brothers and his father, he was a staunch Trade Unionist, and refused to fight on political grounds. Hubert was imprisoned, and kept largely in solitary confinement.

All three survived the war, and their father James had them pose for this photograph. He was equally proud of the decision each of his sons had made, in acting on their beliefs.

Despite the war, letters and postcards were sent between soldiers and their families. There were also many other letters sent during the war. Official letters told parents or wives that a serviceman was wounded or killed. Officers and nurses wrote letters of sympathy. Fellow servicemen sent letters of sympathy and money to the now-widows of their brothers-in-arms.

Corporal James Kingston received a postcard from his children at home in Bristol, while serving in France. It reads:

In August 1918, James’ wife received a telegram saying that he was wounded and dangerously ill, and then another to say that he had died. 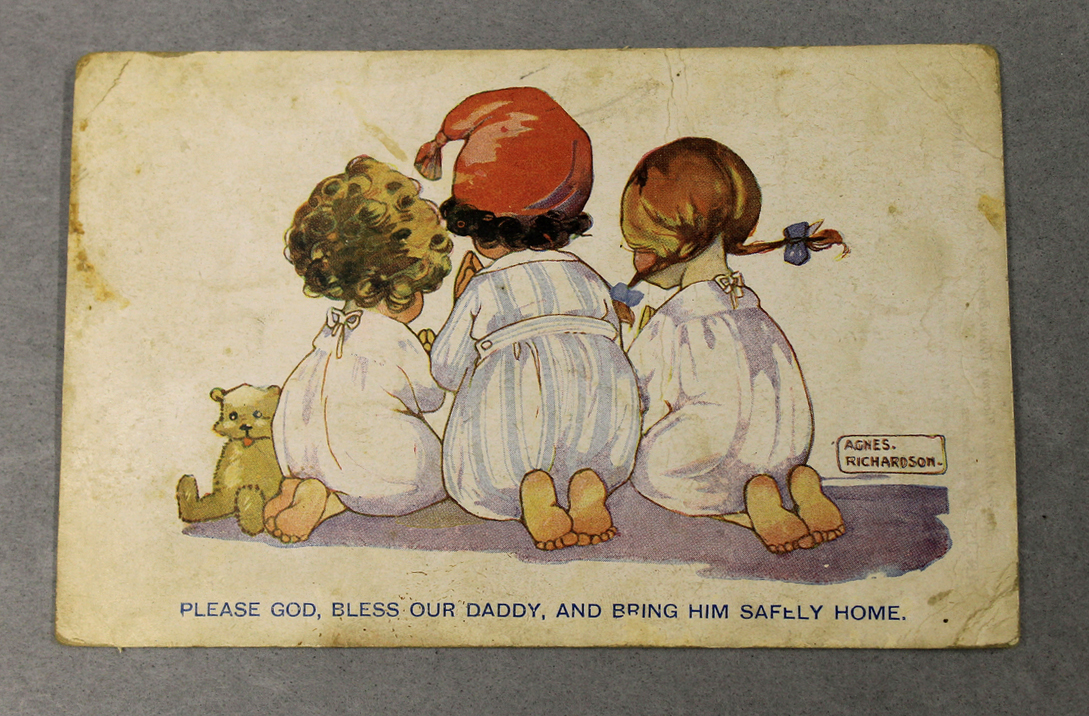 A postcard to James Kingston from his children at home in Bristol. Loaned by Kathleen Meredith. 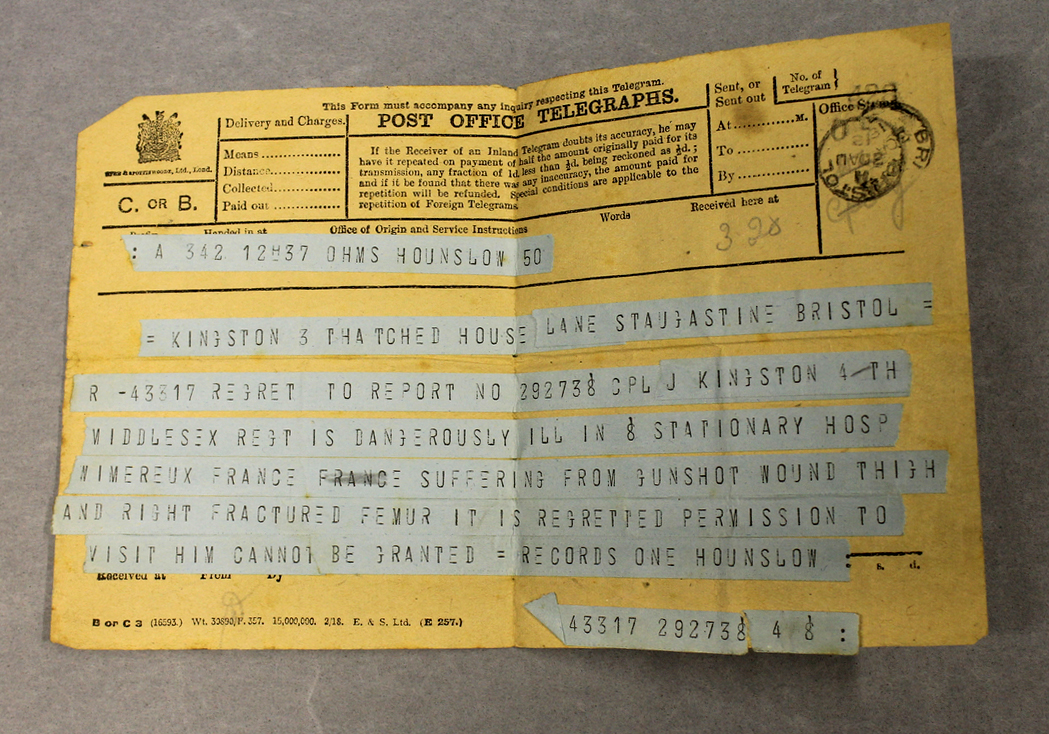 Corporal James Kingston’s family in Bristol received a telegram saying that he was wounded and dangerously ill. Loaned by Kathleen Meredith. 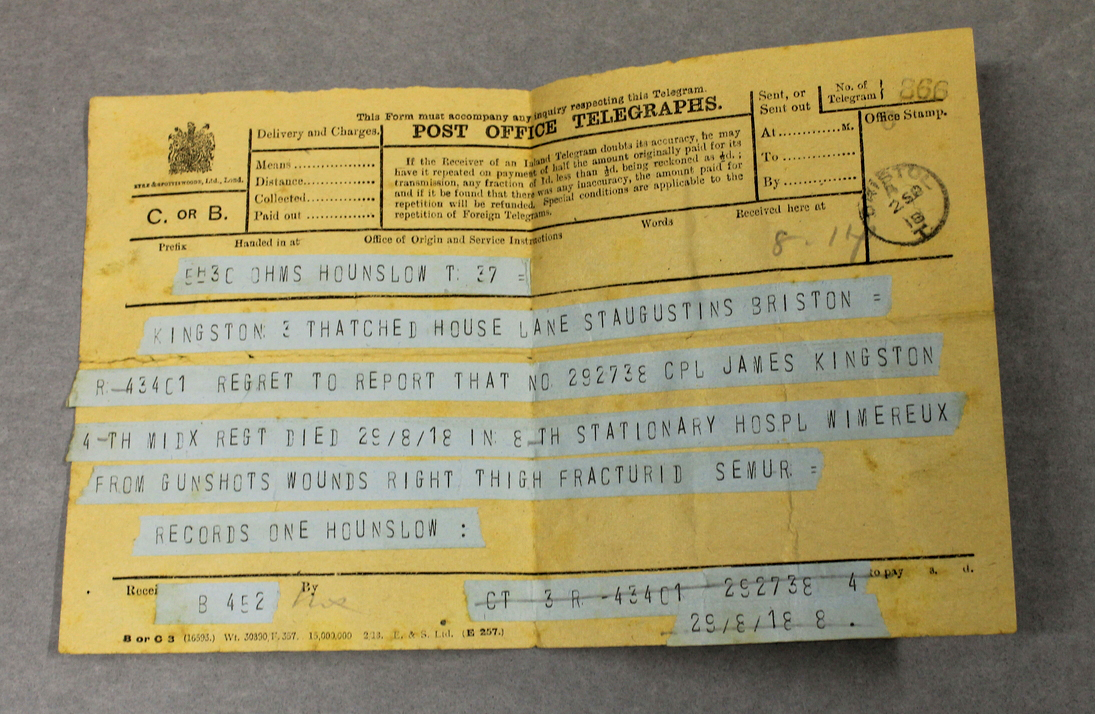 Families dreaded the telegram that told them their husband or son had been killed. Corporal James Kingston’s family in Bristol received another telegram to say he had died on 29 August 1918. Loaned by Kathleen Meredith. 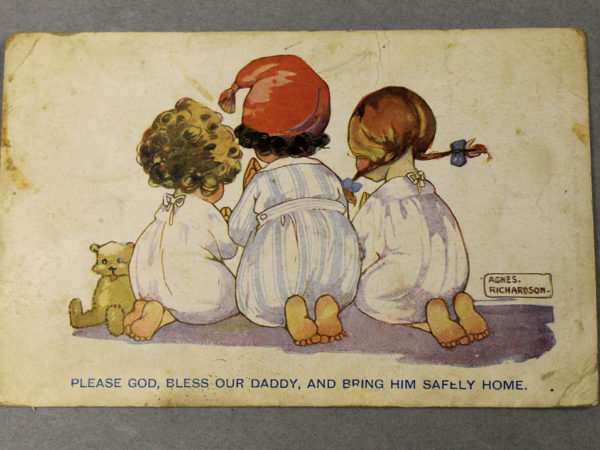 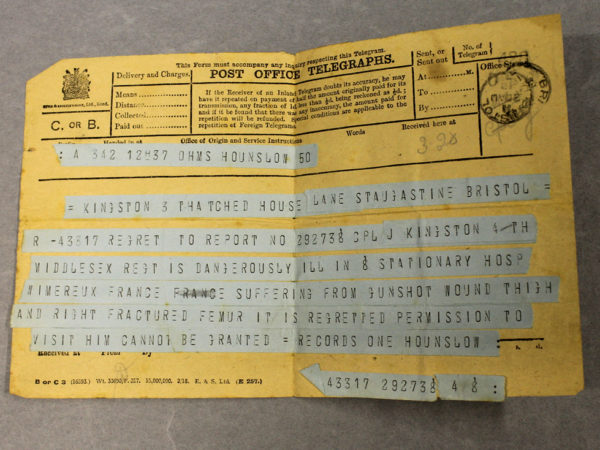 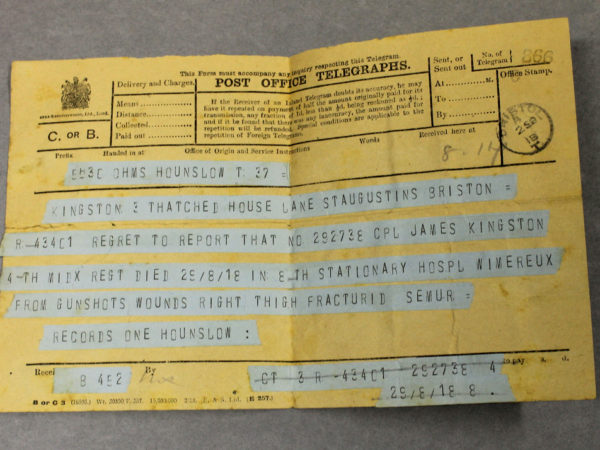 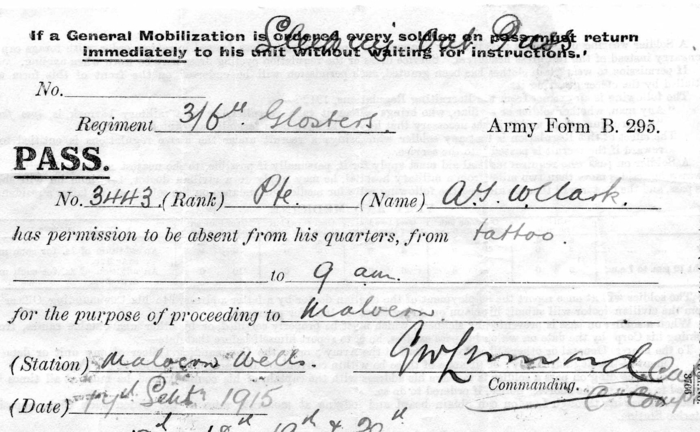 Leave pass for Albert Clark, TD4986 given by Ruth Morgan.

In training and on active service, men were given leave. Leave could be for rest and relaxation, or for family reasons if a wife or child were seriously ill.

Going home on leave from the battle front was a welcome rest from the cold, the wet, the mud and the lice. It was a chance to recover, to live normally, and to meet friends. Soldiers could show off the souvenirs they had collected, and give presents to their family and girlfriends. Some got married, some got their wives pregnant, and some never returned to see the baby.

But many soldiers who had been fighting found it hard to adjust to ordinary life, or to talk about the war to people who had not experienced it and could not understand what they had been through. Some were glad to get back to the war and their fellow soldiers.

The 6th Battalion, the Gloucestershire Regiment went out to France in March 1915. Albert Clark was wounded and returned to Britain in August. By September he was well enough for 4 days leave. 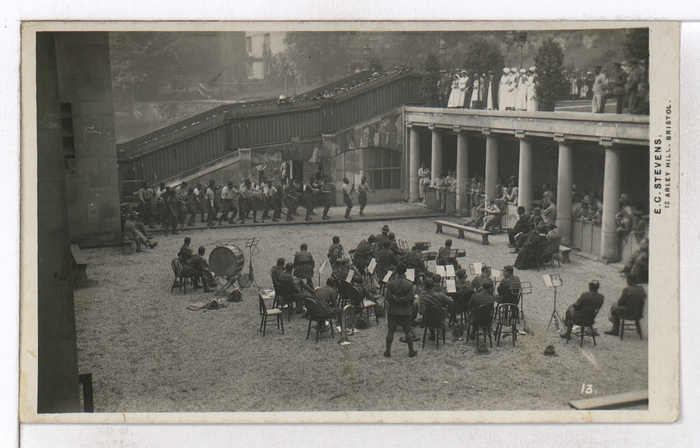 This photograph shows a group of Maori soldiers performing the haka as an entertainment for wounded soldiers at Bristol Zoo.

Few of the Empire troops who joined the forces came through Bristol on their way to training or fighting. Some came here to a war hospital after being wounded.

Most of the 71,000 men from Africa and the West Indies who joined the British Army never came to Britain, but fought in Africa (against Africans) and in the Middle East. There was a colour bar even in wartime. The British Government worried about arming and training Black men and encouraging ideas of independence.

Indian troops were allowed to fight on the Western Front. They took part in some of the fiercest fighting and suffered heavy losses.