Virile bodies and images of desire

‘Pornography is another matter. Pornography attacks human identity; it is a destruction of individuality, an assault on the only thing we possess, and any artist concerned with making naked ladies must struggle to presume a balance between lust and compassion – the balance he wants to make the work right for him.’ Reg Butler

‘…and there is always in them a sense of gravity…which is an important part of being upright, or indeed, of being human at all.’ Hubert Dalwood

‘I enjoy looking at the male body, this has always given me the impetus and the energy for a purely sensuous approach to sculptural form. I like to watch a man walking and swimming and running and being.’  Elisabeth Frink

In the 20th century the debate in art between the idealised image of the nude versus natural naked bodies continued. Artists gained a new freedom to experiment with erotic imagery from their interest in world sculpture. The art historical distinction between idealised nude and real live body was explored by Reg Butler and Hubert Dalwood. It inevitably focused on female bodies. Elisabeth Frink inverted this with her focus on energetic male bodies – swimming, rdng, running – or, in her Prisoner tribute heads, the victims of their violence. 50 years after the scandal involving Epstein and the BMA nudes, the taboos relating to sex in art were lifting. Many sculptors sought to depict sexual pleasure such as Ralph Brown’s Lovers, a rippling fusion of two bodies that are barely visible in his almost flat low relief. This shimmering fantasy brings a sense of movement to the idealised bodies. The contemporary artist Mary Reid Kelley’s darkly humorous video of an autopsy asks questions about the idealised female body, how we internalise ideas about beauty and posterity, and more.  Meanwhile, Zanele Muholi’s Muholi Muholi is a photograph where the artist placed themselves in front of the lens, making reference to a whole tradition of studio photography and the figure of the African male dandy. 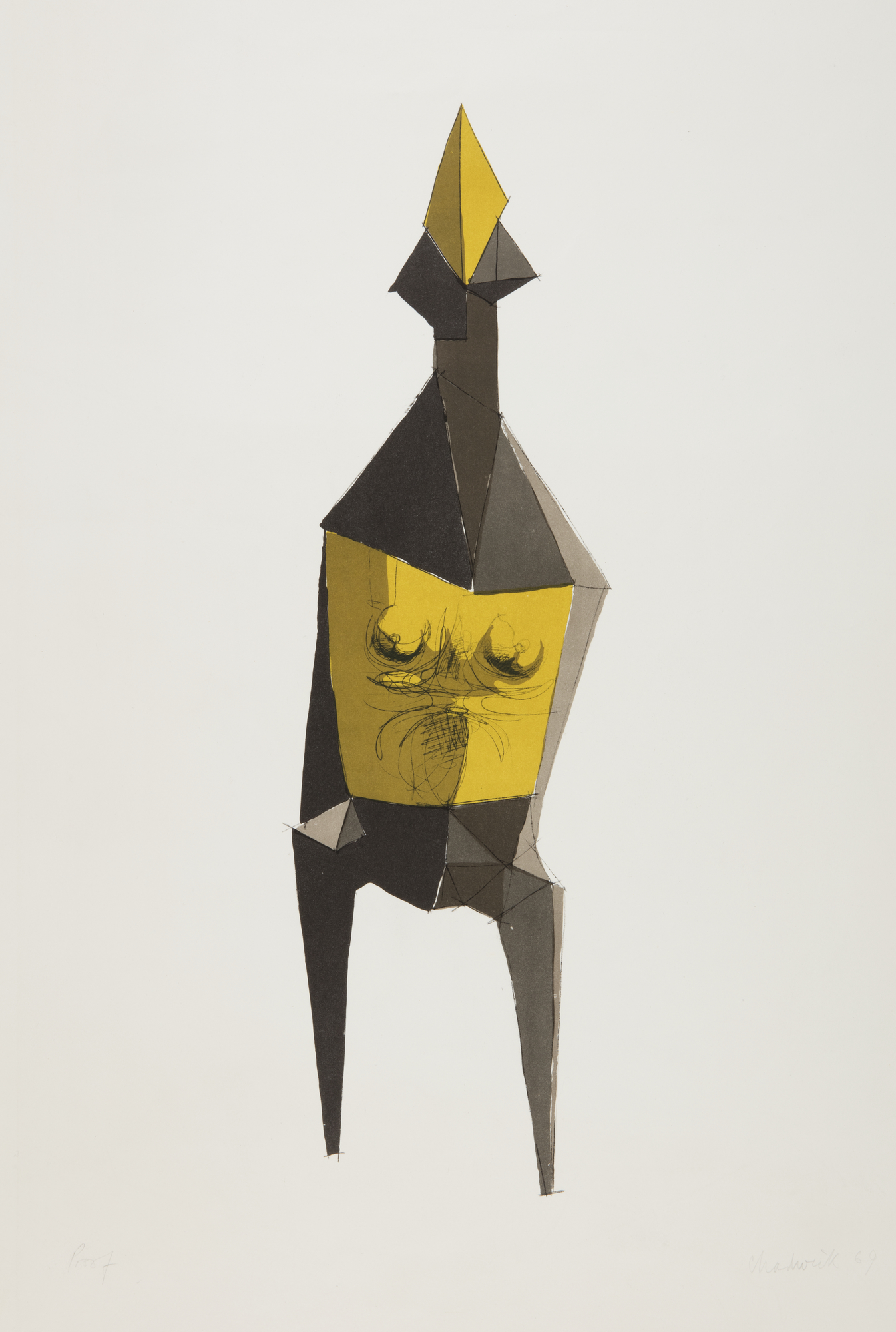 Brown’s early public commission The Meat Porters in Harlow market in Essex shows two sturdy butchers heaving a hefty carcass. His work shifted in style and he experimented with enamelled casts such as for his rippling Odalisques that share the appearance of the abstract New Generation sculptures of Philip King (born 1934), but are not totally abstract.  The Queen was his portrayal of absolute power, loosely based on Elizabeth I but mistaken for an unpatriotic portrait of Elizabeth II. It was remade larger than life size for his 80th birthday exhibition. 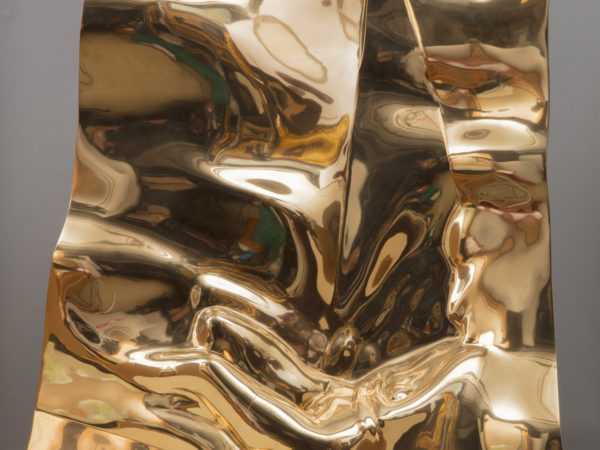 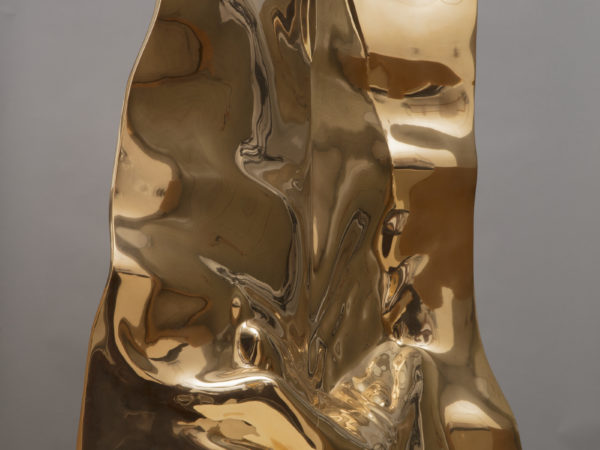 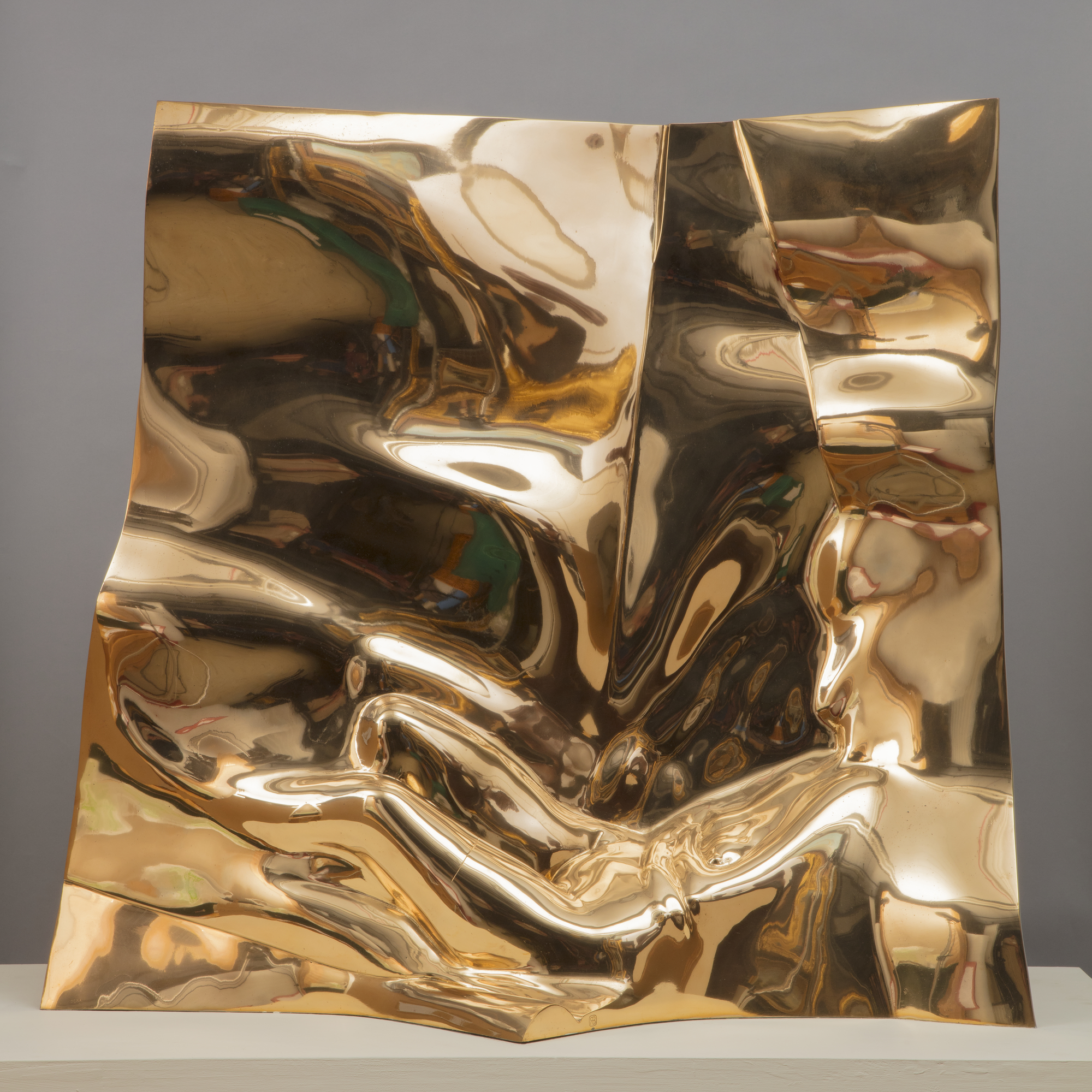 ‘The brightest of all images is the human body, we cannot look at it directly for too long, it dazzles us. This is because, as the Greeks knew, it contains a god, Eros.’ P J Kavanagh 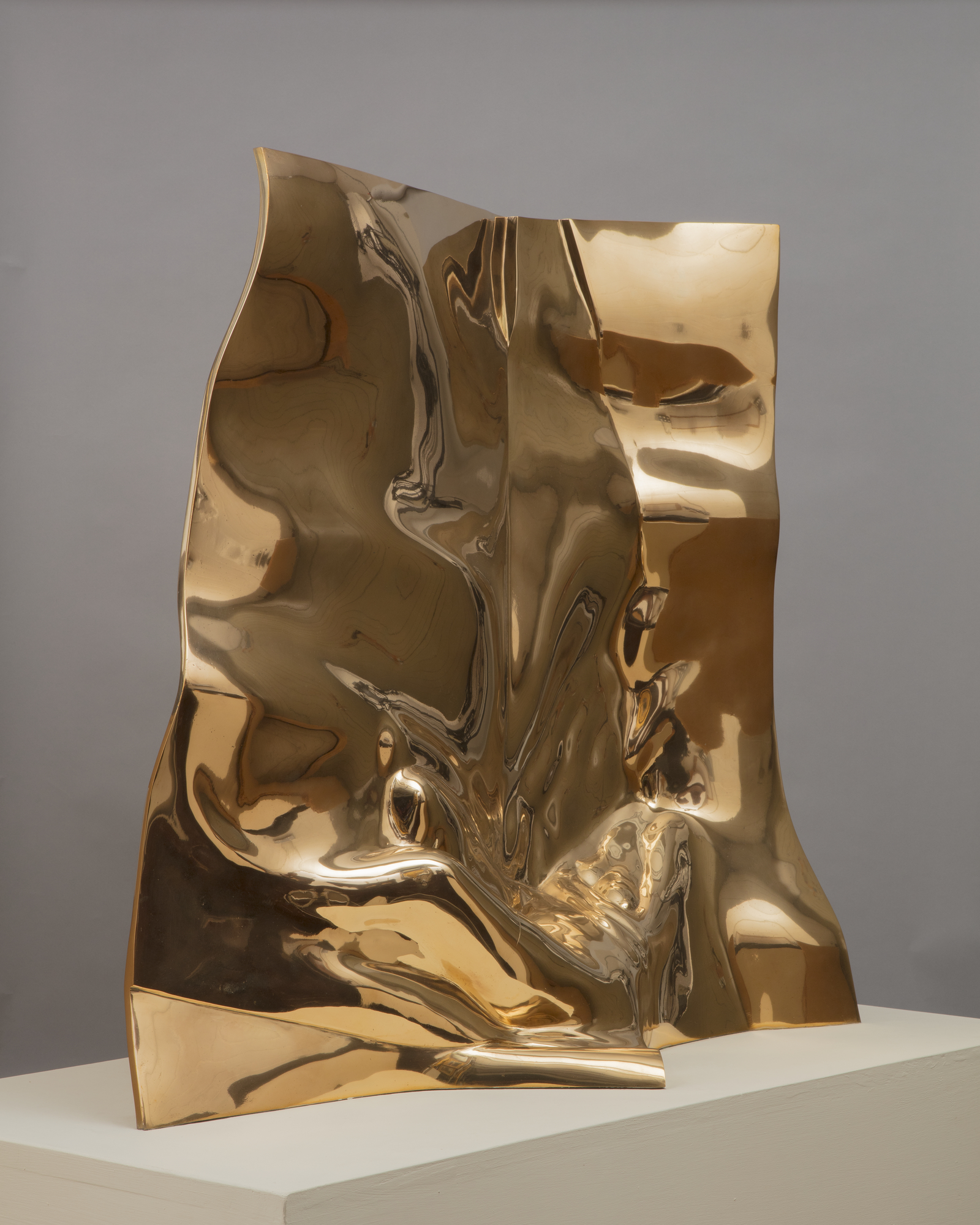 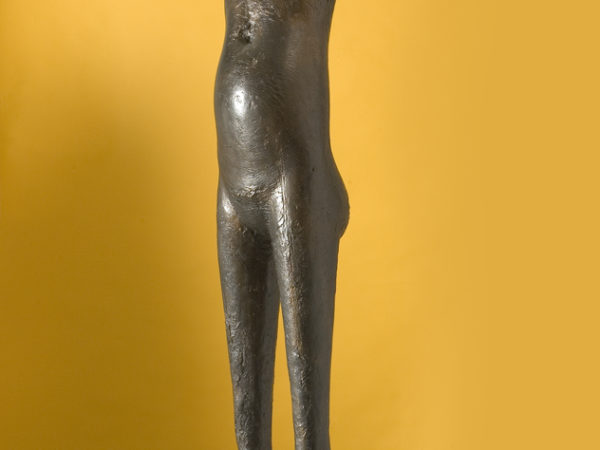 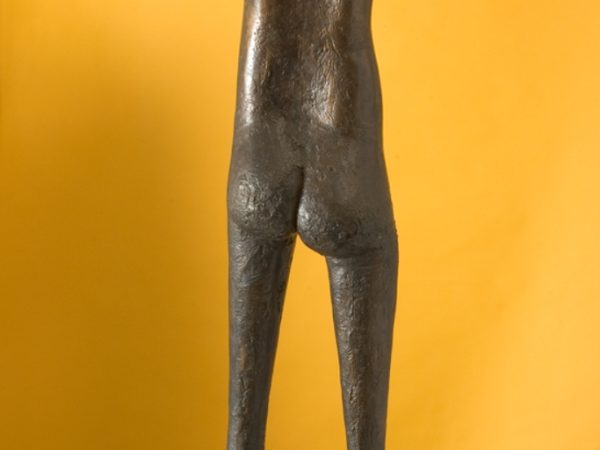 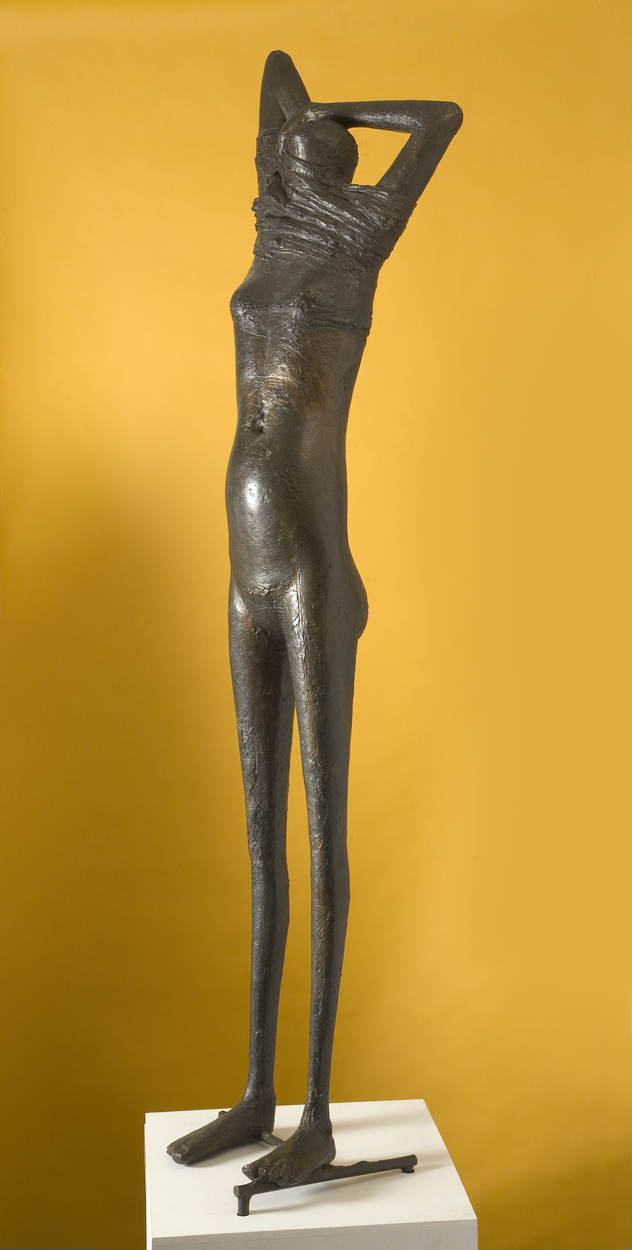 ‘The very trade of sculpture is the manipulation of bodily substance; the spiritual, the metaphysical – call it what you like – cannot manifest itself independently’

Butler worked as a blacksmith during the war and developed this skill in his welded and shaped metal sculpture. He had a fascination with the ancient Willendorf Venus sculpture and his female figures are often highly sexualised.  Girl shows this obsession.  Elongated and perched on a grid, she pulls a clinging garment over her head, her face stretched upwards in a kind of funnel. In his teaching at the Royal College of Art, Butler was the first to distinguish in art between the idealised female nude and the natural naked woman. 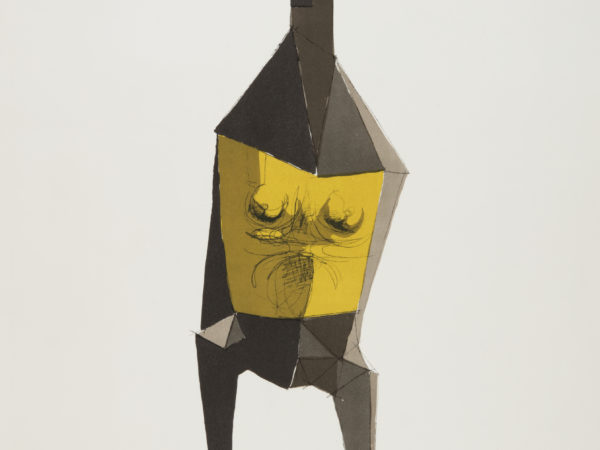 This image is a representation of Chadwick’s 1969 Elektra group of three bronze sculptures with polished sections. ‘Elektra’ does not refer to the ancient Greek tragedy that one might expect: Chadwick usually gave his titles when his work was complete and here elektra translates from the Greek for ‘shining one’. The print represents in line and colour the shiny facets of Chadwick’s sculpture. There is something disturbing about Chadwick’s portrayal of the female: here shown with pert round breasts and a pointed, faceless head.

‘the sensation of any of those figures is of a structure on which the flesh hangs, like a bag of water…’ 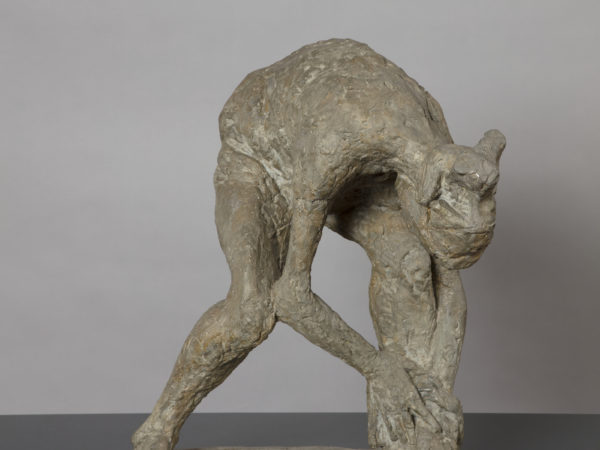 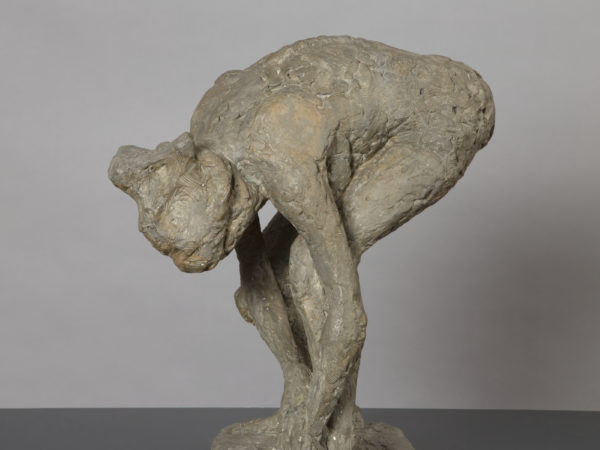 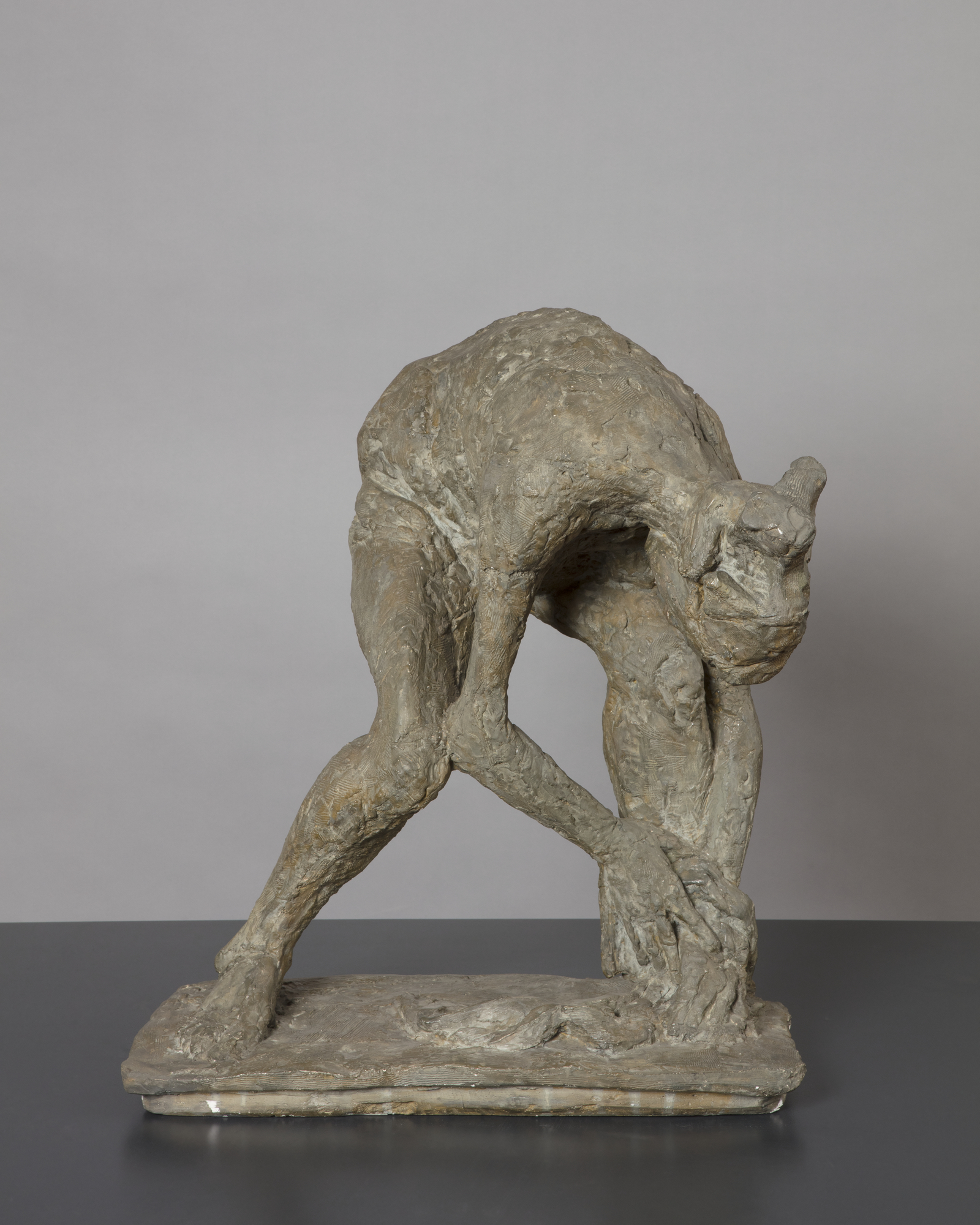 In this early, deliberately un-idealised portrayal of a woman bending over, Dalwood reminds us of Edgar Degas’s terra cotta figures of women bathers and dancers. The visible marks made by the artist’s hand make us think of touching the body. Dalwood shares the awkward approach to women of Chadwick and Butler, but in his unflattering and non-sexual experimentation he was honest about the everyday reality of the naked body. 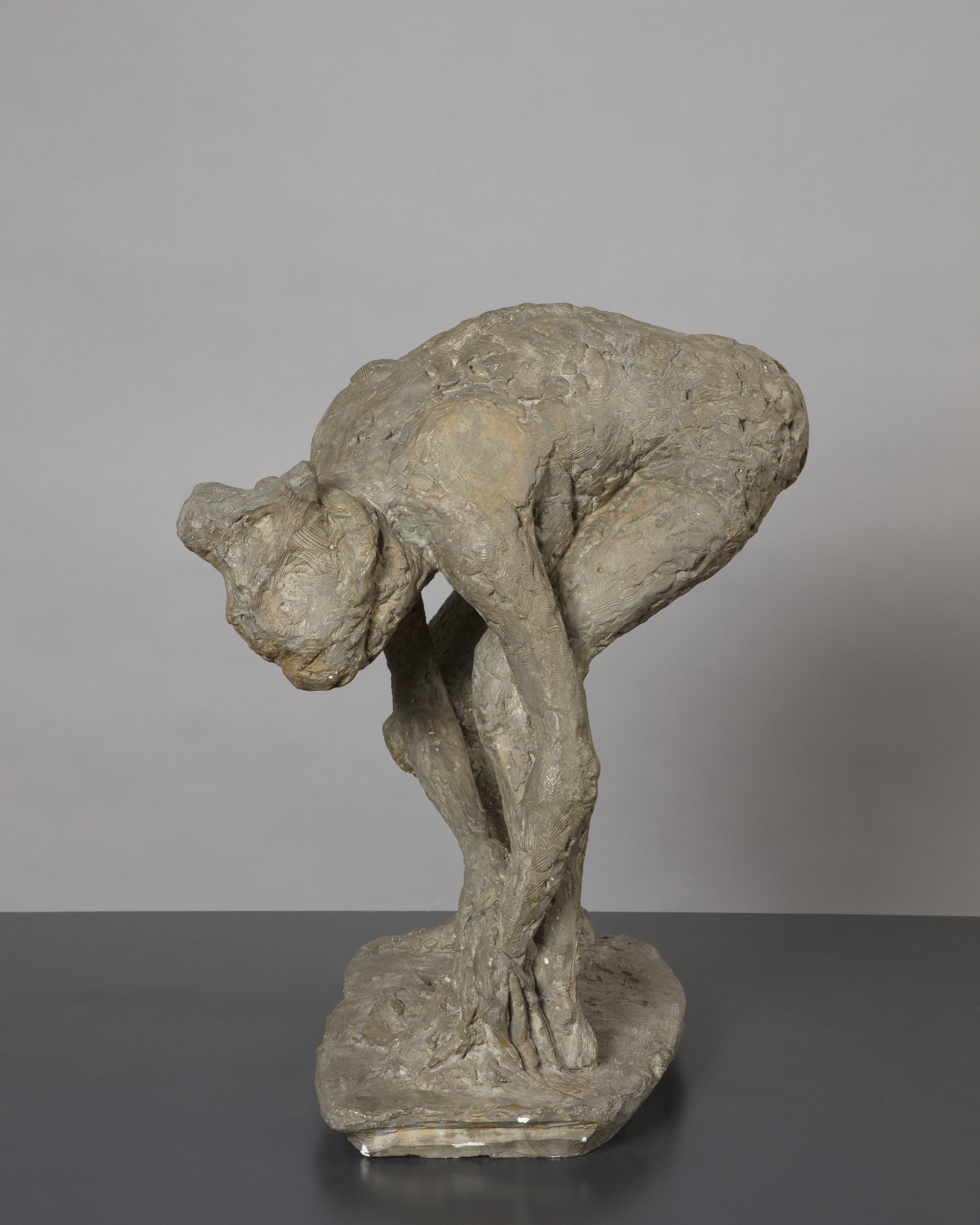 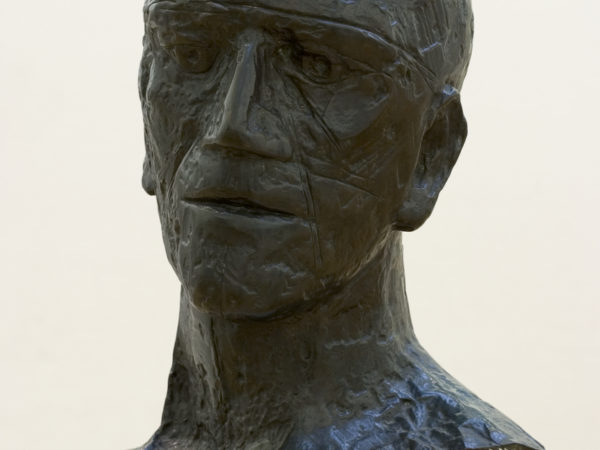 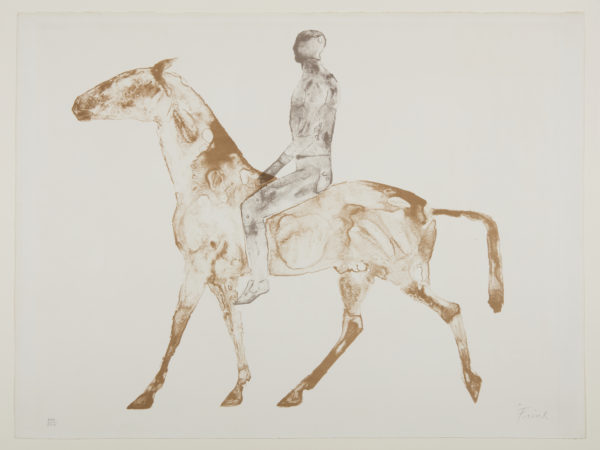 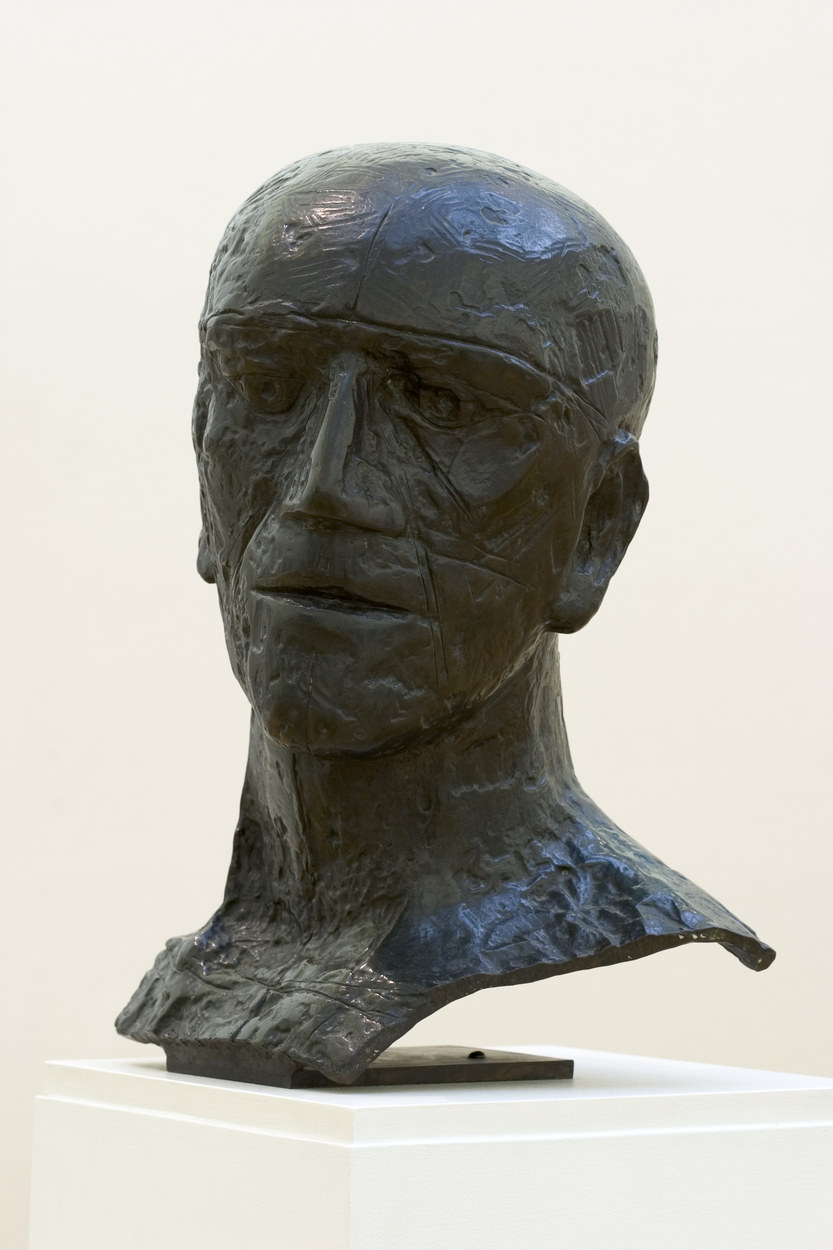 Frink’s art was informed by the nightmarish vision of a pilot she had seen falling from the sky in flames during the war. The so-called ‘goggle heads’ were based on the Moroccan general Mohamed Oufkir. Prisoner is one of her Tribute busts, a victim of the goggle heads, ‘for those people who are living in oppressive regimes, who are not allowed freedom of thought, who are being persecuted for their politics or religion, or being deprived of the dignity of daily living and working.’ 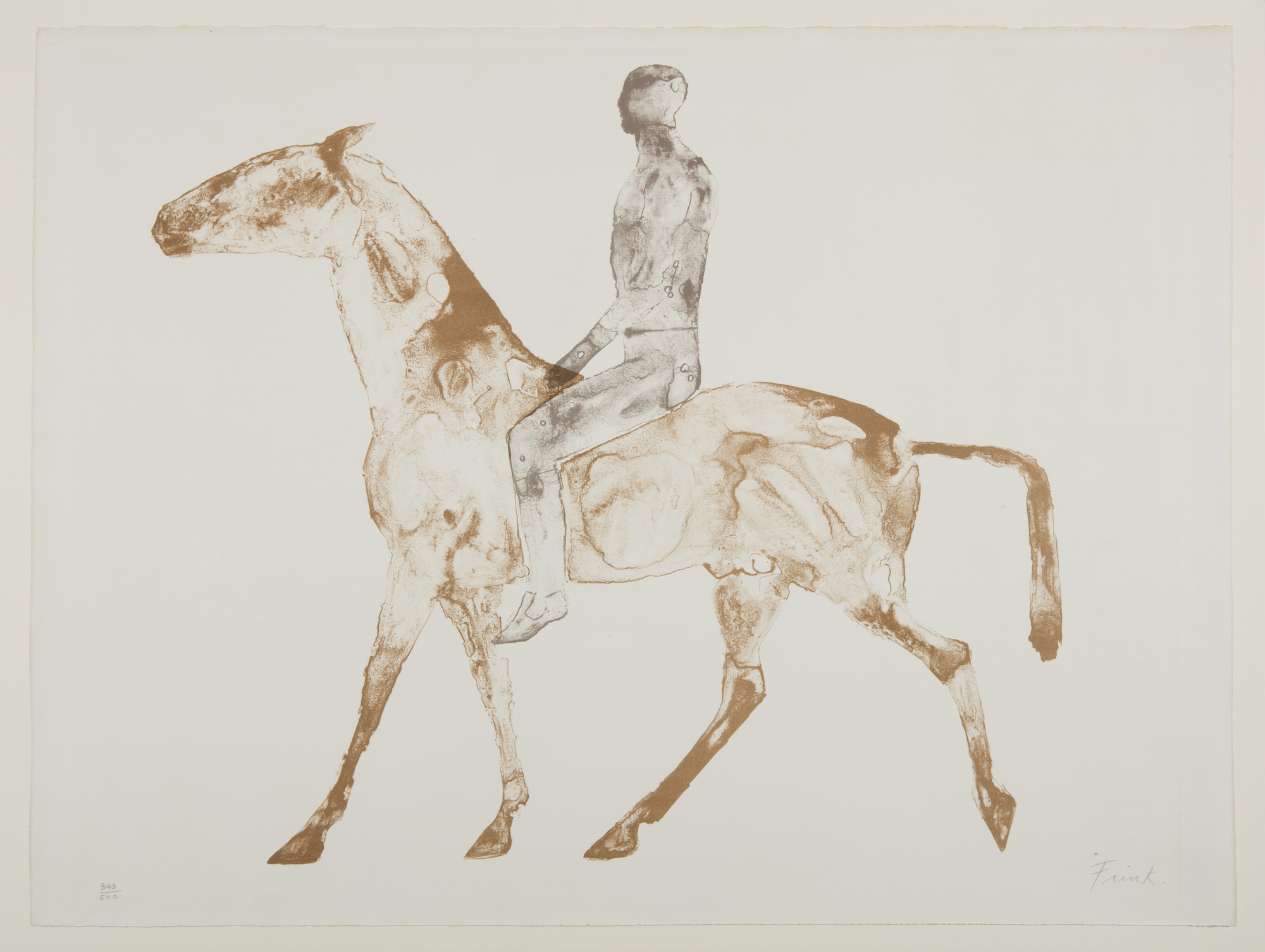 The printmaking technique of lithography appealed to Frink because the image is made on stone. She had a lifelong interest in the relationship between ‘man’ and ‘horse’ but very rarely made female figures, seeing the male as the prototype – she was included in a show at the Institute of Contemporary Art showing women’s images of men in 1980. She was the first woman to be offered the presidency of the Royal Academy – which she turned down.

Mary Reid Kelley and Patrick Kelley make films that fall between performance and animation, with a heightened style of irony and caricature. The films combine performances from Mary, often in multiple roles, wearing illusionistic makeup, in hand-made sets, with green-screen animation, filmed in monochrome. Each work is acted in rhyming couplets and narratives range from Greek mythology (the Minotaur trilogy) to the French Revolution (The Syphilis of Sisyphus), to World War II (In the Body of the Sturgeon). 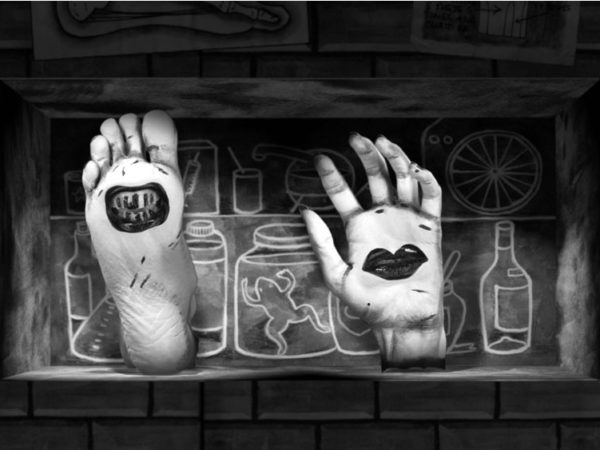 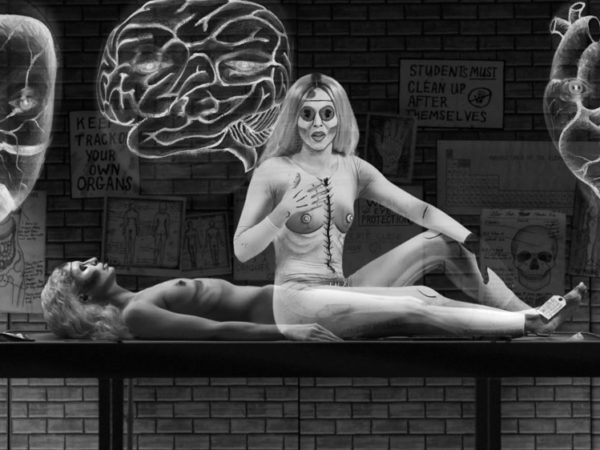 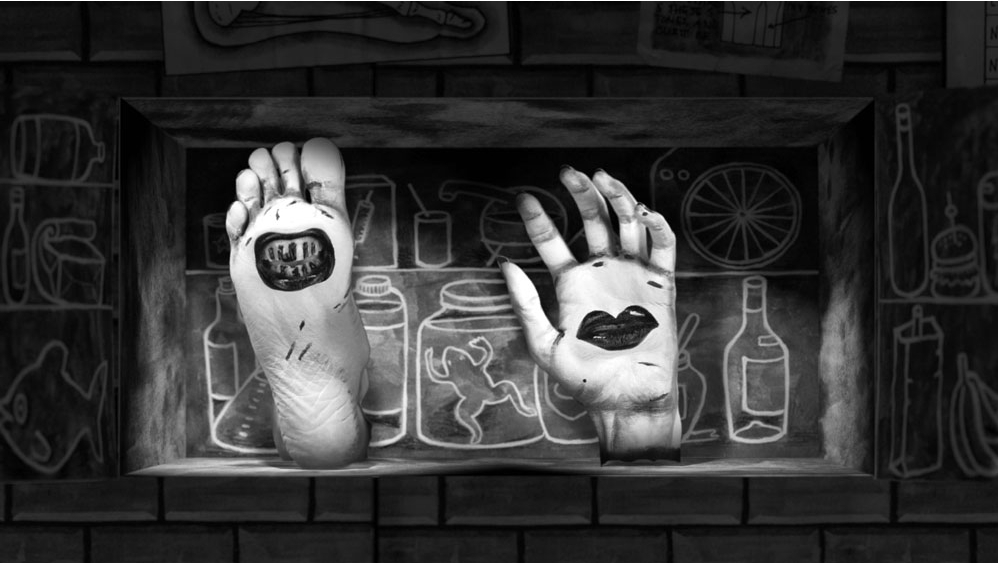 ‘I stink therefore I am.’

Reid Kelley plays a corpse being dissected by coroner Kelley, who declares the cause of death as suicide. In a performance combining animation with live acting, the corpse and her organs debate who was to blame for the death. This is Offal considers body image, gender, suicide and the dead. The film connects with idealised portrayals of the female body in art and we can see examples in the museum and almost all others. There are also portrayals of the dead or dying human body. Kelley reminds us that we are used to seeing images of the taboo. 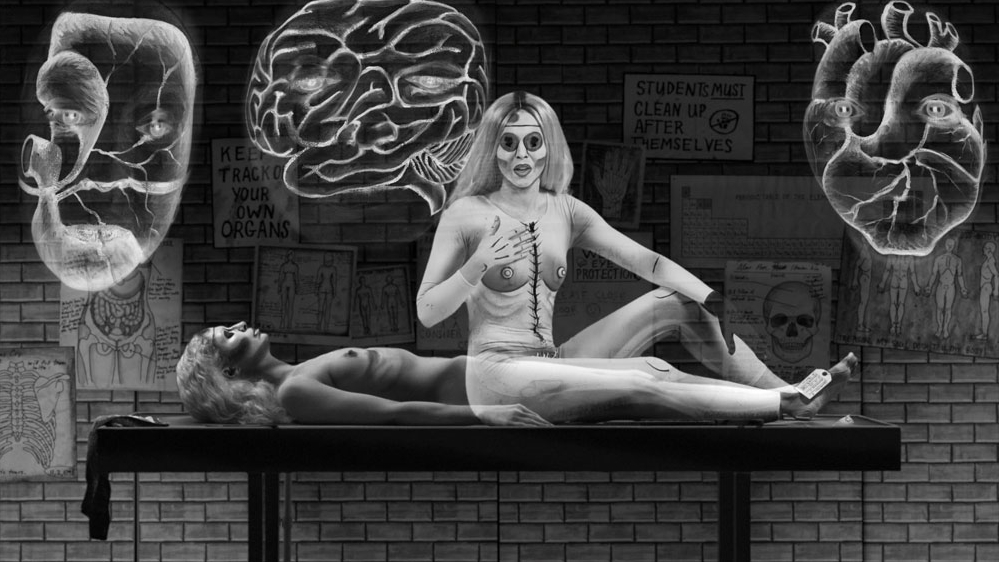 Zanele Muholi is based in South Africa and their photographic career has been a lifelong attempt to make visible the experience of LGBTQI people, especially lesbians who have experienced abuse and corrective rape. Muholi uses the third person pronoun and more recently has trained the camera on themself, producing a body of performative images, sometimes playful sometimes more serious. 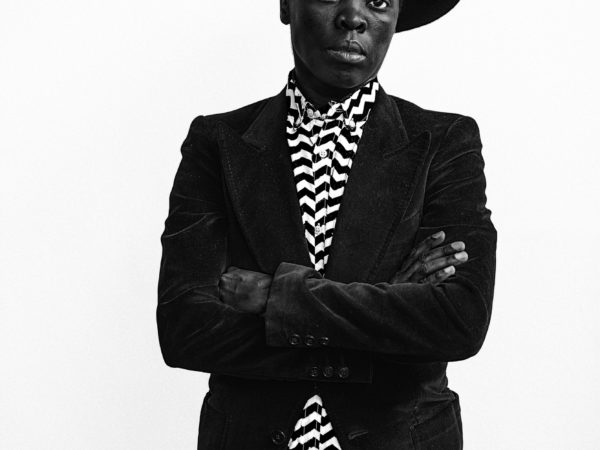 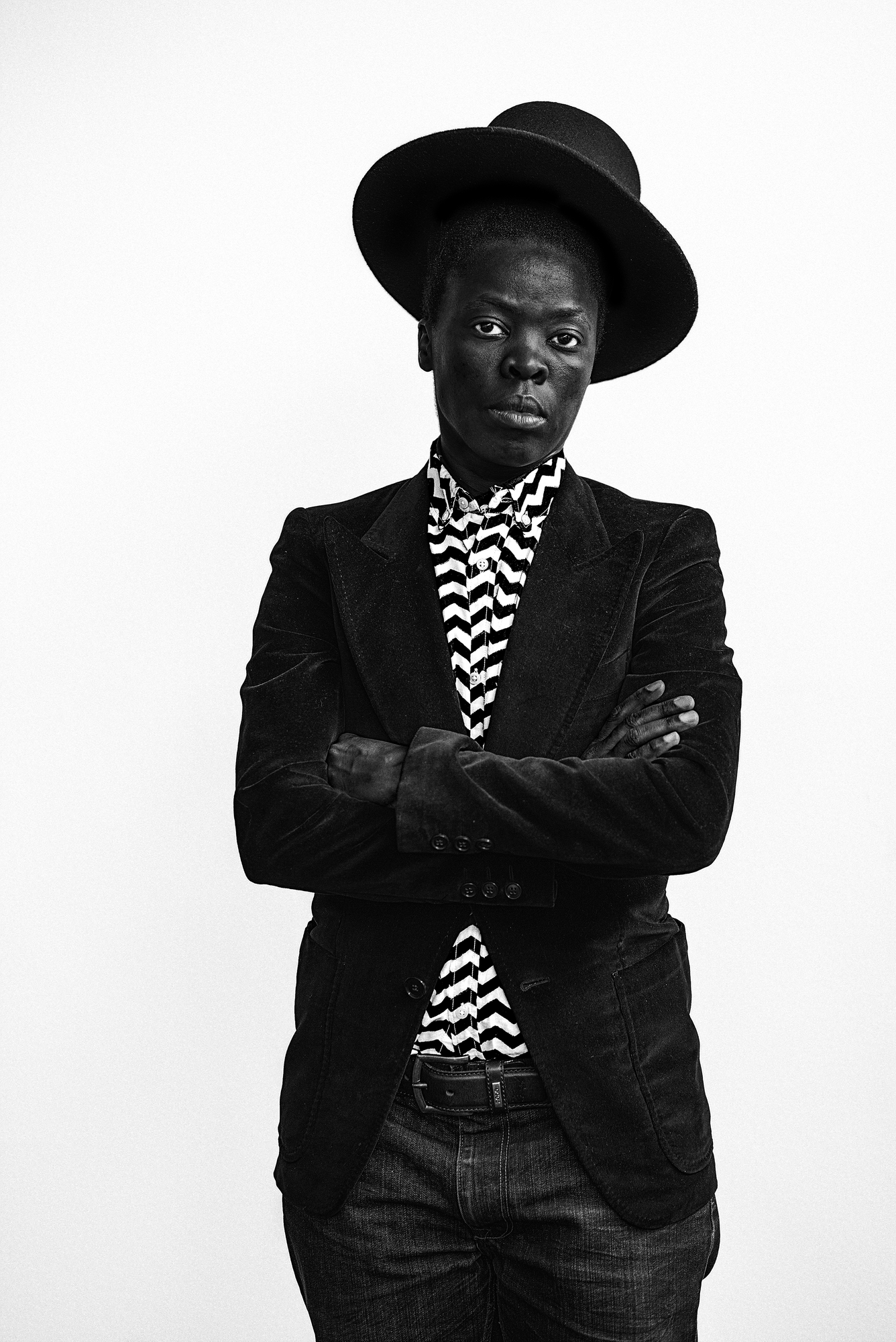 Muholi’s self-portraits reflect on 19th-century western portraiture of African people, through to 20th-century African studio photography, to imagine a feminist and queer self-portraiture. Muholi Muholi is a potrait of the artist making reference to their self-conscious display as a dandy, hinting at 20th-century studio portraits of African men and the sense of self that these portraits exhibit. For Muholi to present their self in this manner is a strong statement about lesbian identity and visibility in contemporary South Africa.

Purchased with support from the Art Fund, the ACE V&A Purchase Grant Fund and the Friends of Bristol Art Gallery